11/02/2008 - The master of Polish cinema revisits a historical event in this film nominated for the 2008 Best Foreign Language Film Oscar, which screened out of competition at the Berlinale

An article published on February 3 by the Russian daily newspaper Niezawisimaja Gazeta sets out to convince readers that the Nazis, and not the USSR, are to blame for the massacre of Polish soldiers in the forest of Katyn in 1940. Similar views were expressed in September 2007 in another Russian newspaper, the Rossijskaja Gazeta, and repeated one month later on Moscow television. These scandalous and false assertions were provoked, paradoxically, by Andrzej Wajda’s Katyn [+see also:
trailer
interview: Andrzej Wajda
interview: Michal Kwiecinski
film profile], a film that aims to refute the lies and restore historical truth.

For Wajda, the traumatic events at Katyn have personal significance: the director’s mother waited her whole life for the return of her husband, who fought in the First World War, the Polish-Bolshevik War, the Silesian Uprising and the September Campaign 1939. This desperate wait for his father’s return left an indelible mark on the director. Only after several years of preparation was he able, in 2007, to express himself and translate the experience into a cinematic idiom.

However, Wajda did not want the film to take the form of an intimate and personal confession. Whilst drawing inspiration from his own past, the filmmaker wanted to create a work with universal appeal and explore the story via a "collective character": the women who waited for their husbands, brothers, fathers and sons.

At the start of shooting, the director commented: "For me, this film is the story of a family forever torn apart, a story of grand illusions and the shocking truth about the Katyn massacre. In short, I see it as a story of individual suffering whose images have greater emotional impact than historical facts".

It took years to find the right screenplay. Wajda abandoned several texts and changed his mind about certain aspects. He even rejected the novel written especially for him by Wlodzimierz Odojewski. Andrzej Mularczyk’s short story - which finally served as the basis for the screenplay - was also substantially adapted by the director.

Wajda wanted to give the viewer a panorama of different perspectives: individual women’s stories, the historical truth about the massacre, the deception maintained against all odds and the suffering of the Polish people. This over-contextualisation and the heavy doses of didactism constitute the film’s main weaknesses, according to critics.

But examining this tragedy - whose details, figures, locations and names have not yet been completely discovered - proved an extremely difficult task. The film crew, the actors (the best in Poland and spanning at least two generations) and the producer know this only too well because, through family ties, a part of them is connected to the victims of Katyn. Making this film was vitally important. It remains the first and only feature film to centre on the events.

Shot in 4K digital and involving difficult subject matter, we discuss the domestic box-office hit Katyn with its producer from Akson Studio, a loyal partner of Wajda.

In Poland, we meet with internationally acclaimed director Andrzej Wajda who decided to reveal the truth about a painful episode in Polish history

The master of Polish cinema revisits a historical event in this film nominated for the 2008 Best Foreign Language Film Oscar, which screened out of competition at the Berlinale

Olga Chajdas, Jan P Matuszyński, Jasmila Zbanic and Oleg Sentsov are among the filmmakers being supported by the main Polish funding body 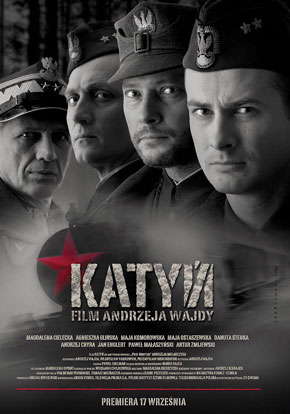