Life and emptiness in Better Things

Better Things [+see also:
trailer
film profile] deals with shocking subject matter in a sophisticated style. Opening with a death by drug overdose and infused with a mournful atmosphere, this debut feature by the UK’s Duane Hopkins screened in competition today in the Critics’ Week, revealing the work of a young director with impressive cinematic flair.

In the same vein as his two multiple award-winning shorts (2004 EFA Award for Love Me or Leave Me Alone), Hopkins has set his self-penned ensemble film in a village in the Cotswolds, in central western England, and uses mainly non-professional actors. Skilfully interweaving five separate stories, Better Things unfolds from an initial comment that perfectly captures the prevailing mood: "Real life was tough at the best of times."

The film centres on two teenagers who are either trying to escape from reality and the emptiness of everyday life by turning to drug addiction (with Liam McIlfatrick in the lead role), or battling with agoraphobia (Rachel McIntyre) and desperate love affairs. At the same time, the feature – whose plot and dialogues are minimalist – looks at the lives of their grand-parents’ generation (a dying woman and an old couple suffering a crisis in communication).

All these characters are unstable and appear to be on the verge of breakdown, even though a better life seems almost within reach.

The world of drug-taking is explored in documentary style, from smoking joints to shooting up, popping pills and waiting for the local dealer. The drug consumption is shown in minute detail – and is not recommended for the faint-hearted.

This Short Cuts-style film, full of fragile hopes and imbued with a deathly atmosphere, is outstanding in terms of its directorial approach. From the skilful changes in rhythm to the editing and the aesthetic effects of the natural light, Hopkins reveals an originality and talent that the future will no doubt confirm.

Sold internationally by French company Celluloid Dreams, the film will be distributed in France by Memento and released domestically by Soda Pictures.

British director Duane Hopkins brings Bypass to the London Film Festival after screening it in Venice. Cineuropa speaks to him

"The societal change has opened up a void"

Producers on the Move 2011 – United Kingdom

Existential searches lie at the heart of the eight edition of the Alba International Film Festival (March 17-22), for the second consecutive year under the artistic direction of the Holden School...

Nine European productions dominate the line-up of 13 new releases hitting French theatres today. The largest print run belongs to a French comedy about journalism and the power to manipulate...

Double win for Involuntary at Stockholm

The 19th Ljubljana International Film Festival ended on November 23 with Steve McQueen’s Hunger winning the Best Film Award. The competition consisted of first or second films, and included the... 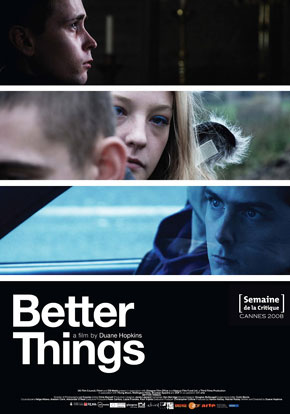