The young girl and the Grown Ups

Seventeen-year-old Jeanne is a good girl. It’s the summer holidays: a time for travels, discoveries and the first flutterings of the heart. But Jeanne wants to escape from her overly protective father.

This resolutely European film – an artistic and financial co-production between France and Sweden – is set in the Scandinavian country and has a cast of French actors who star alongside local talent.

Set on the photogenic island of Styrsö, in the Gothenburg Archipelago, Grown Ups centres on a couple of French tourists: single father Albert (Jean-Pierre Darroussin) and his only daughter Jeanne (Anaïs Dumoustier). A misunderstanding about rented accommodation means they have to stay with two women in their forties who are also single: the owner of the house (Lia Boysen) and her visiting French friend (Judith Henry).

This unexpected turn of events enables Jeanne – an introverted and serious girl – to get to know (perhaps in a romantic sense…) some young Swedish boys of her age. They go for bike rides, spend evenings on the beach playing guitar around a campfire, drinking beer and kissing.

The film – co-written by the director, Mathieu Robin and Béatrice Colombier – has a simple and universal plot which revolves around the father-daughter relationship. We see the daughter’s timid transition into womanhood, as the father more or less resigns himself to seeing his paternal authority challenged. But in the end, the adults – the “grown-ups” – turn out to be just as fragile as the youngsters.

Full of long takes, Novion’s film is a subtle portrait of a blossoming teenage girl. But Grown Ups is also pure comedy, with a wonderful performance by Darroussin. Playing the archetypal Frenchman abroad, the actor delights in the gentle ridicule of this narrow-minded librarian who flaunts his knowledge based on quotations and is never without his metal detector, as he cherishes an absurd dream of finding Viking treasure.

Produced by French company Moteur S'il Vous Plait Production (70% investment), Grown Ups was co-produced by Sweden’s DFM Fiktion (30%). The film’s overall budget of €1.77m included a €400,000 advance on receipts from the National Film Centre (CNC), €75,000 in backing from the Swedish Film Institute, €250,000 from Eurimages, financial support from Film i Väst and pre-sales from TPS Star and Cine Cinema.

The film will be released domestically in September by Memento Films, who are also handling international sales.

The highly original duo of filmmakers-actors is sharing the bill with Emmanuelle Riva and Pierre Richard; the movie is sold by MK2

A new movie for Anna Novion, filmed in Sweden. Europe in the limelight, with Sergei Loznitsa, Ignacio Ferreras, Martin McDonagh and Hans-Christian Schmid

Pascale Ferran's new film is one of seven projects selected by the region's film fund.

A five-star line-up for Pyramide

The European Film Market looks set to be successful for French international seller Pyramide with Frédéric Videau’s Coming Home (pictured, see news) in its line-up. The film has joined the already...

Presented every year to two promising talents of French cinema, the Romy Schneider and Patrick Dewaere Prizes were awarded in Paris yesterday evening to Anaïs Demoustier and Gilles Lellouche,...

Demoustier gets taste of real life in Living on Love Alone

Winner of the Leopard for Best Debut Film at Locarno 2006 for The Year After, Isabelle Czajka returns to screens with her second feature, Living on Love Alone, released today by Bac Films. The...

At the end of May, Polish director Malgorzata Szumowska (33 Scenes from Life - see interview) will start shooting in Paris on her fourth feature, Elles. The cast includes Juliette Binoche (to be...

Olivier Coussemacq’s debut feature Sweet Evil has been selected in international competition for the 45th Karlovy Vary Film Festival (July 2-10, 2010). Unveiled as a market premiere at the latest... 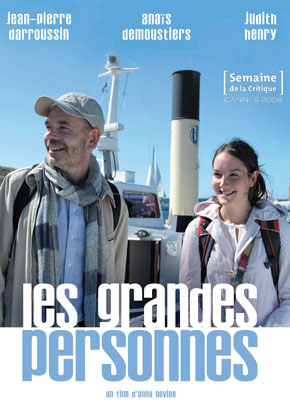