14/07/2008 - This personal journey of a woman who ends up in the steel-making town of Seraing, trying to break free from her immigrant status and longing for a better life, touches the essence of humanity

Right from the start of the film, its title poses a problem. For what silence are we talking about, considering that Lorna speaks, replies, questions, asks and ends up soliloquising as if words were in fact the vital lifeline that sustains her? Or should we understand this silence as internal and the words expressed as an attempt to quieten a conscience which gives the young woman no peace until she stifles her turmoil? It is true that Albanian Lorna agrees to a marriage of convenience, but at the same time she tries relentlessly to avert the fate that hangs over the fake couple she forms with Claudy. The latter – a pathetic junkie – is himself a willing partner in a plot of which he becomes the victim.

In this brutal world – governed by the law of profit and the desire for personal enrichment, without concern for the consequences this could have on others, for it is precisely on the back and at the expense of others that this financial enrichment is achieved – Lorna’s scruples do not carry much weight. And yet, these scruples symbolise the gulf that separates her from Fabio, the scheming taxi driver who handles the young woman like a financial asset. He hopes, in this way, to become part of the real underworld of the Russian mafia, by arranging another marriage of convenience between Lorna and a mafioso gangster.

For his plan to succeed, Fabio needs to ensure that Claudy is definitively out of the picture. This is achieved not through the divorce procedures which Lorna tries to hasten but via more swift means that befit this human wreck who believes that, by giving up his drug addiction, he can win the love of this woman.

Perhaps it’s the power of this sentiment that the Dardenne brothers are celebrating here? The fact remains that Claudy does indeed come off the drugs and, without warning, the unthinkable happens: one evening when Claudy threatens to plunge into hell again, Lorna takes the initiative to give herself to him. But the idyll is short-lived for, after a dramatic narrative ellipsis, we realise that Claudy is dead.

At that point, the film changes tack completely. Lorna starts to ask questions again, for nothing can force her to keep quiet now, even if her life hangs only by a thread. For if she is pregnant, the deceased Claudy continues to live on inside the young woman. This is what she announces to her future husband. This is what Fabio finds out, even though the doctors refute her claim. However, Lorna still believes she is carrying Claudy’s child, because true love simply can’t fail to leave its trace…

Lorna’s Silence [+see also:
trailer
interview: Arta Dobroshi
interview: Arta Dobroshi
interview: Jean-Pierre et Luc Dardenne
interview: Olivier Bronckart
film profile] stands out as unusual in the Dardennes’ filmography. The camerawork is more restrained because the camera has become more of a witness than an actor. Moreover, the issue explored in Lorna’s Silence is much more vast than in the Dardenne brothers’ previous films, for through Lorna’s story the directors look at the world and globalisation. This narrative shift calls for another, cinematic shift already seen in the ending to The Child [+see also:
film review
trailer
interview: Luc & Jean-Pierre Dardenne
film profile], with its homage to Robert Bresson’s Pickpocket. The Dardenne brothers’ films are thus still conceived as “a window onto the real” but will from now on focus as much on the formal rigour of the director of Money as on the pragmatism inherited from Rossellini.

We met with Olivier Bronckart, who produced Lorna’s Silence, which signals a shift in the Dardenne brothers’ œuvre

Cinergie met with the Dardenne brothers’ latest discovery, a 28-year-old actress who hails from Kosovo but considers herself a citizen of the world

The Dostoevskys of Belgian film

Cinergie met with Luc and Jean-Pierre Dardenne shortly after their return from Cannes, where they were honoured with the award for Best Screenplay (their fifth prize after four selections)

This personal journey of a woman who ends up in the steel-making town of Seraing, trying to break free from her immigrant status and longing for a better life, touches the essence of humanity

Illegal Woman being shot in Lleida

One Day comes out on top at the CinÉast Festival 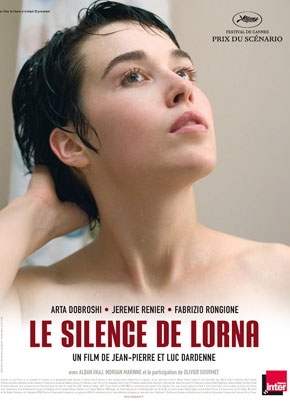 The Croatian Audiovisual Centre offers €660,000 to projects during the pandemic