08/09/2008 - A lyrical and charming second feature that attempts to recapture the rhythm, lightness and spirit of the great burlesque actors of silent film

Resolutely old-fashioned and defying all trends, Rumba [+see also:
trailer
interview: Charles Gillibert
interview: Dominique Abel and Fiona Go…
film profile] is an unusual work and a welcome addition to the Belgian film landscape. The film unfolds in a rather vague temporality that recalls the atmosphere of post-war country comedies starring gentle dreamers and clumsy clowns such as Fernand Raynaud, Bourvil and Darry Cowl. The highly personal world of Dominique Abel, Fiona Gordon and Bruno Romy is extremely stylised, colourful and joyful, poetic and sometimes melancholy, without ever lapsing into pathos. This is a world in which laughter does not arise from mockery or parody but rather from the empathy felt for the characters and the complicity with the viewer.

Dom and Fiona live a peaceful life in the idyllic countryside, recalling the cartoon adventures of Modeste and Pompon: theirs is an unreal and fairytale-like world. The film’s zest and originality reside in the atmosphere that avoids easy drama, the simplicity of the characters and the situations. Rumba is a breath of fresh air punctuated by the impressive dance moves of the two (anti)heroes during their frantic and choreographed rehearsals.

Endeavouring to recapture the rhythm, lightness and spirit of the great burlesque actors of the silent era, such as Chaplin, Keaton and Harold Lloyd, Rumba reclaims the meaning of the terms gag and physical comedy and has an absurd and quirky edge. If we compare the film with its predecessors, we’ll find, however, that it has more in common with Pierre Richard’s early films from the start of the 1970s (The Daydreamer, The Troubles of Alfred), with their eccentric, clown-like, fragile and clumsy characters, who are looking for love and chasing after a lost happiness that they move further away from with each step. Human clumsiness, the fragility of happiness and the need for love: Rumba explores these adult themes through absurd comedy sprinkled with countless hilarious and good-natured gags.

Peppered with "old-fashioned" cinematic devices (day for night, matte shots, retro-projections), Rumba is sparse on dialogue and hinges in particular on the physical (body language) and visual aspects of the performance and on a simple narrative in a popular style. The camera frame remains very still and the shots are extremely precise: the comings and goings, the body movements, the surprises in the background: everything is very well-orchestrated. The directors enjoy playing with the elements (rain, wind, shadows, fire), which give the film its distinctive lyricism and outdated charm. A well thought-out comedy composed like a work of art is very rare in contemporary European film.

Unfortunately, elements that worked wonderfully in the short format often lose their momentum in the feature format. A few serious losses of rhythm thus mar the overall success during the third act and we notice that in certain scenes the enjoyable delirium of the characters is not taken to its limits. Moreover, while Gordon proves to be superbly captivating and eccentric, Abel lacks the charisma that could have made him a burlesque hero of boundless optimism, inspired by the heroes of silent film.

These criticisms aside, Rumba is a cultural exception, an atypical film that would be wrong to dismiss. It is an ambitious work with true cinematic vision and has the merit of being light-hearted as well as moving, accomplished and frequently brilliant.

A lyrical and charming second feature that attempts to recapture the rhythm, lightness and spirit of the great burlesque actors of silent film

The science of movement

We met with the colourful couple, partners on stage and in real-life, who are united by their boundless passion for the burlesque, as their second feature is released in theatres

The highly original duo of filmmakers-actors is sharing the bill with Emmanuelle Riva and Pierre Richard; the movie is sold by MK2

The Measure of a Man and Mountains May Depart stand out on the company’s slate, which is chock-full with a total of five films in the Official Selection

The hilarious misadventures of an eccentric couple. A burlesque and poetic work unveiled at Cannes. 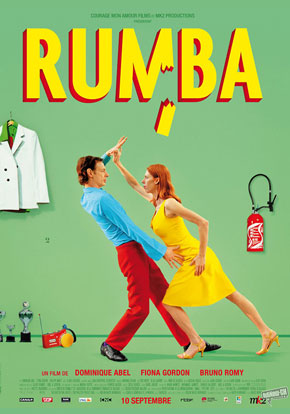