There is a fine between sincerity and brutality, one that is easy to cross. One that British director Mark Herman walks like a tightrope walker for 90 minutes in The Boy in the Striped Pyjamas [+see also:
trailer
film profile], selected in official competition at the San Sebastian Film Festival.

Based on the bestseller by John Boyne, the film tells the story of the family of a Nazi general in command of a concentration camp. The originality of the story lies in the point of view the director uses to tell it: that of an 8-year-old boy.

Bruno, the general’s son, lives in the headquarters that border a group of barracks, in which everyone wears striped pyjamas. Separated by barbed wire, Bruno becomes close friends with Shmuel, a Jewish boy. The friendship will compel the former to experience the drama of Nazi violence firsthand.

The Boy in the Striped Pyjamas could have been a blockbuster tearjerker with a happy ending but Herman and his exceptional cast (Vera Farmiga, David Thewlis, Rupert Friend) instead opted for sobriety and objectivity.

Released domestically by Miramax (which also co-produced), the film has been out since September 14 in the UK on 167 screens, to strong box office results. On September 28 it will be distributed in Spain and will continue down its path of assured success towards cinemas throughout Europe and the US.

more about: The Boy in the Striped Pyjamas

Debut feature has won awards around the world

A number of film initiatives have taken place in Iraq since the invasion began. But now Erbil, one of the country's largest cities, which is also thought to be the longest continually inhabited...

Martin Scorsese has begun production on his latest film and his first film in 3D, Hugo Cabret, in London. Young British actor Asa Butterfield (The Boy in the Striped Pyjamas) plays the title role....

The Film and Audiovisual Arts Institute (ICAA) yesterday published the official 2008 Spanish box office results. No miracle has taken place since last December (see news) and the final figures are... 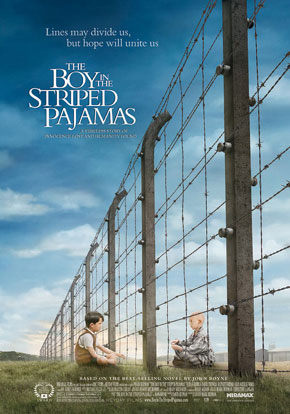