Impossible love story at heart of mafia in Galantuomini

Set in Lecce (Puglia, southern Italy) in the early 1990s, Galantuomini [+see also:
trailer
film profile] (“Honourable Men”) centres on an impossible love story between a female mafia boss and a judge. This latest film by Edoardo Winspeare screened this morning in official competition at the Rome International Film Festival, where it was enthusiastically received by the press.

In his film, the director – born in Salento (in the far south of Puglia) but of Scottish origin – recounts the reunion between Lucia (Donatella Finocchiaro), the merciless leader of one of the factions of the Sacra Corona Unita (Sacred United Crown: the largest criminal organisation operating in the region), and Ignazio (Fabrizio Gifuni), a judge who returns to Lecce after working for several years in Milan. The latter doesn’t suspect the true identity of Lucia, whom he has always loved.

Both characters are unable to accept their attraction and are torn between their obligations and feelings. Lucia struggles to assert her position in a very macho world, while Ignazio is determined to put an end to mafia activity in the region.

At the press conference, Winspeare said he intended to make “a melodrama about a great love story”, giving lesser importance to the analysis of the mafia. He nonetheless defines the organisation as “the major cancer of this country, which is the most beautiful and, at the same time, the ugliest in the world”.

For the character of Lucia, Winspeare was inspired by the relative of an arrested mafioso. The director said he presumed she was “a victim of the events and her family, but essentially innocent. Until I discovered that she too was guilty of just as many crimes”. This is exactly what happens to judge Ignazio in the film.

Filming is under way on Oltre il confine by Alessandro Valenti

BLS supports six new projects for a total of €1.5 million

One of the three Italian projects is the new film by Edoardo Winspeare. The other three come from Austria, Germany and England. Around 116 days of filming are planned in South Tyrol

Berlinale: Going back to the land in In grazia di Dio

In grazia di Dio by Winspeare selected at the Panorama

Apulia director’s new film is the story of four women from the same family, all touched by the economic crisis who move to a small village in Salento

The Apulia National Film Fund set to finance five cinema productions with a total investment of €760,000

Servillo plays a hunted animal in A Quiet Life

The Italian actor of the moment, Toni Servillo plays Rosario, a chef hiding a criminal past in Claudio Cupellini’s Italian-German co-production A Quiet LIfe, which hits Italian screens November 5... 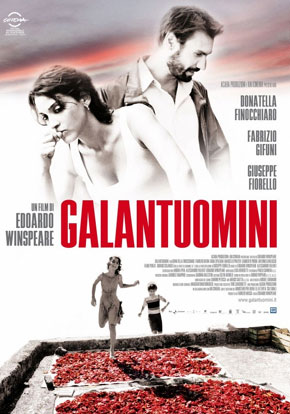