16/12/2008 - A potent blend of love and teenage angst, Swedish vampire film Let the Right One In continues to scoop up prizes at festivals worldwide

Quiet, touching and poetic are not normally terms associated with vampire films, but there are no better words to describe Let the Right One In [+see also:
trailer
interview: John Nordling
interview: Tomas Alfredson
film profile] from Swedish director Tomas Alfredson. Based on the bestselling children’s novel from John Ajvide Lindqvist, the film tells the story of Oskar, a 12-year-old boy who is bullied in school but finds help from an unexpected source.

Alfredson (Four Shades of Brown) mostly sells his film as an unassuming and lovingly photographed coming-of-age story, but the carefully balanced narrative does occasionally tip over into the absurd before scuttling right back to its generally sweet disposition. This unusual mix should do well at festivals with late-night programming, though at 114 minutes the film might test the patience of viewers Oskar's age.

The film’s impressive first sequence sets the tone for all that is to follow. A prolonged shot of snow gently descending in the dark of night gives way to a mesmerizing image of a pale young blond, almost an albino, who stands in front of the window in nothing but his briefs. He touches his mirror image – the image is actually doubled and slightly distorted because of insulated glazing – while he intones "Squeal like a pig!"

It is an unusual start for any film, let alone a film based on a children’s novel and is especially noteworthy because it is unafraid of silence and the absence of action (younger children might get twitchy). It also reveals the underlying theme of the film in a visually inventive manner: the story might see the young Oskar (Kåre Hedebrant) battle his demons with the help of a friend (as yet unseen), but the things he is really facing underneath it all are his own insecurity and fears – a classical part of any coming-of-age story.

Though intelligent because he "reads" – as he succinctly explains to a police officer who is impressed by his knowledge – Oskar is bullied in school by a couple of stronger boys and he never fights back. All he hopes for is a friend, and when Eli (Lina Leandersson), a girl more or less his age, moves in next door, he is not easily put off by her warning that she does not want to be friends.

Sure, she’s a bit strange; impervious to the cold and always about at night, but she also seems to be nice and understanding and encourages him to stand up for himself against his bullies.

As the relationship between the two develops, a series of murders is shown in quite some detail, with the murderer’s main aim appearing to be to tap blood from his victims (he hangs them upside down, slashes them open and uses a funnel and jerry can to get what he needs).

Alfredson’s handling of tone is very important in these scenes, stressing the matter-of-factness of the work and not the gore and gruesomeness, which makes it surprisingly easy to accept the murders as part of what is in essence a sweet prepubescent love story that just happens to be disguised as an anti-bullying pamphlet with supernatural overtones.

The film's most touching sequence involves Oskar asking Eli out after having invited her in. The scene takes place in bed late at night but carries no sexual charge, just an overwhelming sweetness that does not want to go away – another demonstration of the director's mastery of tone.

Acting from Hedebrant is strong and technically the film is also superb, starting with Dutch-Swedish DoP Hoyte Van Hoytema’s breathtaking visuals. The editing of Tomas Alfredson and Daniel Jonsäter works well for an adult audience but might prove too measured for adolescents and those with a short attention span. Johan Söderqvist's orchestral score enhances the different yet coherent moods with brio.

more about: Let the Right One In

The success of Let the Right One In comes, above all, from the emotions evoked by this small, tender, romantic and terrifying love story

Tomas Alfredson, Eskil Vogt and Thomas Vinterberg are among the recipients of a total grant of nearly €3.5 million

Border celebrates a sixfold victory at the Guldbagge Awards

The 14th Prague Short Film Festival poised to kick off 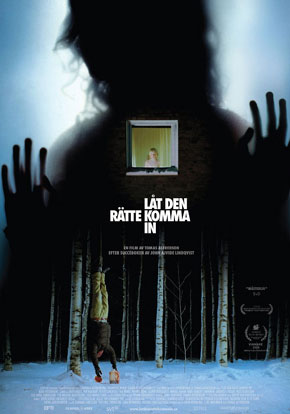