Rage in the running for Golden Bear

Lenny Crooks, Head of the New Cinema Fund said, “Sally Potter is a filmmaker with courageous cinematic vision and to be recognised at Berlin is testament to her talent and creativity.”

Sally Potter’s previous credits include the acclaimed Yes [+see also:
trailer
film profile] and The Man Who Cried. This time, she trains her eye on the New York fashion scene. Rage is an exposé of the scene, told as a documentary made by a schoolboy backstage at a fashion week show. Much of the film is seen from the point of view of the schoolboy’s cell-phone camera. A catwalk accident leads to a homicide investigation and a warts-and-all picture of the industry emerges.

Andrew Fierberg and Christopher Sheppard have produced the film for Adventure Pictures while Cinetic Media and 6 Sales are handling worldwide sales. The New Cinema Fund has invested £200,000 in the film.

Cinetic’s Bart Walker said, “So many of the elements we value are present in this alliance with Sally Potter and 6 Sales for Rage – strong and iconic artist on the cutting edge of technology, a provocative and entertaining movie with a wonderful cast, and a dynamic approach to sales in which the filmmakers' point of view will be central.”

BERLIN 2017: British filmmaker Sally Potter talks about The Party, a comedy that she unveiled in competition at Berlin

They are young, gifted and promise to offer European film their flourishing talent. For the 15th year, the European Film Promotion turns the spotlight to ten new Shooting Stars, and will introduce...

Iconoclast director Sally Potter presents her latest feature, Rage, in Berlin as part of the Competition line-up. The film, a UK/US co-production, is an audacious talking-heads extravaganza set in...

Rage in the running for Golden Bear

British director Sally Potter’s Rage has been chosen to screen in competition at the Berlin International Film Festival (February 5-15, 2009). The film was co-funded by UK Film Council’s (UKFC)...

On Friday, the organisers of the 59th Berlin International Film Festival (February 5-15, 2009) announced the first ten titles selected in official competition (including four out of competition).... 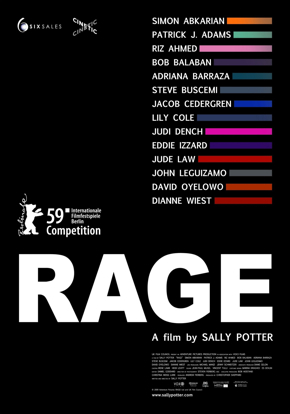