06/01/2009 - In his fourth film, Joachim Lafosse – one of the most talented directors of his generation – continues his exploration of the communication and transgression of limits

In his fourth film, Private Lessons, Joachim Lafosse – one of the most talented directors of his generation – continues his exploration of the communication and transgression of limits.

As we remember, this also formed the subject of his previous film, Private Property [+see also:
film review
trailer
film profile]. In Private Lessons [+see also:
trailer
interview: Jacques-Henri Bronckart
interview: Joachim Lafosse
film profile], 16-year-old Jonas (Jonas Bloquet) prefers tennis to his studies, the point of which escapes him. However, if he fails his exams, he’ll have to go to technical school.

Three bisexual and homosexual adults familiar with the pleasures of debauchery offer to help him pass his exams. Jonas is also concerned about how to make love with a girl for the first time.

His first sexual discoveries come thanks to the love of Nathalie, a girl his own age. Yet sexual relations are often awkward at this age – boys are too hurried and they surprise girls, who prefer the sensation to last. There is a failure to reach orgasm.

Three adults – Pierre (Jonathan Zaccaï), Nathalie (Claire Bodson) and Didier (Yannick Renier) – decide to educate Jonas by giving him practical advice. "How do you do that? In what position? Do you experience pleasure?" Confused, Jonas doesn’t know which way to turn and considers breaking up with his girlfriend.

Maths teacher Pierre helps Jonas prepare for an important remedial exam. But the teaching given by Pierre and his friends Didier and Nathalie turns into practical advice on the sensual pleasures of multiple sexuality.

The game played by the three adults is based on a depravity they want to share with Jonas so that he becomes part of their libertine group. Lafosse commented: "I wanted to make a film that looks at the power of the perverted relationship. After all, perversion is a defence mechanism like any other. It’s just the worst choice. But the other issue is that it’s very convenient for us, as neurotic individuals, to follow a guru, a guide who makes decisions for us."

Lafosse’s directing style has evolved since his debut film. Bodies studied by rapidly-moving shots have given way to lengthy long takes that try to capture the emotion and affectivity of the characters in the exploration of their bodies.

The interesting aspect of Lafosse’s work is the constant movement between control and loss of control, which gives great freedom to the film that – through Jonas – boldly plays on the indeterminacy rather than the simple definitiveness of the situation. What interests Lafosse is the object of desire, the mystery of sexual behaviour and the non-circulation of bodies.

Private Lessons avoids moralising on the life of a teenager trying to emerge from adolescence. Far from being damaged by a bad experience, Jonas gets his life back on track. Many viewers will be disturbed by the film’s unclear position and bold exploration of sexual behaviour. This non-dramatic, intensely emotional atmosphere, characterised by in-betweenness and indecision, recalls the work of Maurice Pialat, Lafosse’s favourite director. Private Lessons is thus a masterly film.

Interview with Jacques-Henri Bronckart of Versus Production, who have announced a busy slate for 2009, starting with the release of Joachim Lafosse’s Private Lessons

In his fourth film, Joachim Lafosse – one of the most talented directors of his generation – continues his exploration of the communication and transgression of limits

"Unravelling the figure of the saviour, the hero"

Cineuropa caught up with Joachim Lafosse on the occasion of the release of his new film, The White Knights, which most notably questions the limits of humanitarian aid

After Love: "What’s left of our love?"

After Private Lessons in the Fortnight in 2008 and Loving Without Reason in Un Certain Regard in 2012, the director will be in attendance on the Croisette once again with L’Economie du Couple

Ten Europeans for the Directors’ Fortnight

Five French filmmakers, three Italians, one Belgian and a Swiss director are on the line-up, which includes Bellocchio, Larrain, Lafosse, Jodorowsky, Kashyap and Poitras

Shoot to start next Monday for Fleur de Tonnerre

Déborah François, Benjamin Biolay and Jonathan Zaccaï are among the cast of the feature debut by Stéphanie Pillonca-Kervern, produced by JPG and sold by Le Pacte 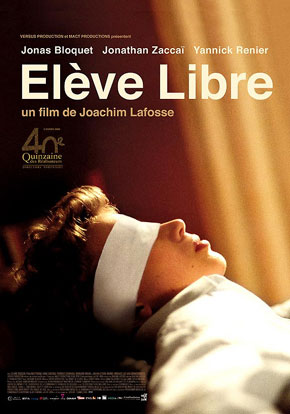