The Secret of Kells

However, the film – which draws its inspiration from The Book of Kells, an illuminated manuscript that is considered a treasure of global artistic heritage and is on display in Dublin – skilfully links it to universal and timeless themes: the rite of passage to adulthood and the survival of art against the hostility of a materialistic environment. These two individual and collective issues merge in the 2D adventures combining heroic fantasy and historical realism and centred on four main characters who embody as many human values.

At the centre of the film – written by Fabrice Ziolkowki – is 12-year-old Brendan, who lives in the Abbey of Kells under the iron rule of his uncle, Abbot Cellach, an authoritarian man whose sole concern is to construct a wall capable of keeping out the Barbarians. But the arrival of master illuminator Brother Aidan opens up new horizons for the obedient Brendan.

Firstly, the horizon of art, its beauties and creative powers open up to him, as Brother Aidan brings with him the as-yet unfinished Kells manuscript and encourages the young boy to take part in its composition. Then there is the horizon of the unknown, the outside world to which Brendan has until now been denied access, a world dominated by the forces of Nature and the irrational.

These forces are embodied by the wolf-girl Aisling, a forest spirit, and the terrifying Crom Cruach, who is hidden away in the depths of his cave and symbolises the Jungian fear that human beings must confront in order to be reborn. This terror has its real equivalent in the hordes of Vikings, armies of huge shadows that surge along to the sound of drums in a scene of bloody violence.

Skilfully developing two levels of interpretation, The Secret of Kells is an epic accessible to young audiences and a philosophical tale for adult viewers. The film is distinguished in particular by a medievalist graphics that touches on the sublime in the forest scenes. Playing fully on the colours and shapes in contrast with the greyness and banality of the abbey, the film enters a dreamlike dimension in which the magic of Celtic mythology and the stunning aesthetic quality of the Book of Kells (which is reminiscent of mandala art) combine for the greatest visual pleasure of viewers.

The Secret of Kells is a successful film that bears a strong message about the importance of artistic transmission and the creative awakening that transcend dark conflicts and security fears. The film is also the worthy representative of a European animation scene that resists graphic and narrative conformity and the tropes of 3D.

Part of a tradition that reflects the common ground uniting diverse European cultures, the film was made possible thanks to the combined efforts of Ireland’s Cartoon Saloon, France’s Les Armateurs and France 2 Cinéma, Belgium’s Vivi Film, and Hungary’s Kecskemet (who collaborated on the production). The result of this European alliance has been selected in the Generation section of the Berlin International Film Festival, which is a fine showcase for its numerous financers, including the Irish Film Board, Eurimages, the MEDIA Programme, the French Community of Belgium, Flanders Audiovisual Fund, Wallimage, Promimage, the Belgian tax shelter fund, Canal + and Ciné Cinéma.

Sold internationally by Celluloid Dreams, The Secret of Kells will be released in France by Gebeka Films, in Belgium by Kinepolis and in Ireland by BVI.

more about: The Secret of Kells

“Art and culture protect us in difficult times”

Interview in Paris with the Irish director of The Secret of Kells, who also initiated production on the project through his co-owned company, Cartoon Saloon

The Secret of Kells

Ten European heritage films are available online, free of charge and in eight languages for students aged 11 - 18 years and for teachers in all member countries of Creative Europe

The Breadwinner triumphs at the Women’s International Film Festival

The first edition of the international gathering, held in Madrid last week, has garnered a warm welcome from the public, critics and the media alike

The Wolfwalkers: Into the Irish wild 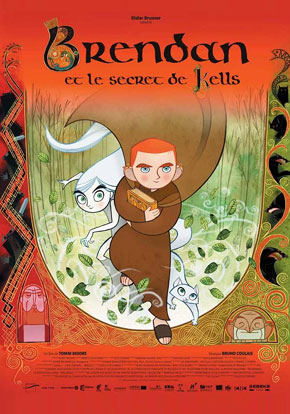