An Education of a dutiful daughter

The special Berlinale screening of Danish director Lone Sherfig’s first English-language work, An Education [+see also:
trailer
film profile] – the Audience Award winner at this year’s Sundance Festival – was so well-attended that organisers had to open a second theatre.

The audience was not disappointed. From the onset, which is reminiscent of the colourful aesthetic of Mike Leigh’s latest film and set to the sound of lively music, we are plunged into a delightfully picturesque, early 1960s England. And a world inhabited by a gallery of well-portrayed characters, including a wonderfully awkward Alfred Molina.

At the centre of this world is Jenny (a highly convincing Carey Mulligan), an accomplished, fresh-faced young lady who attends deportment classes, speaks French, plays the cello and excels in literature. Her dialogue is the work of a particularly witty Nick Hornby, whose screenplay provides much amusement.

Jenny is conscientiously preparing for entrance to Oxford University, under the guidance of her father (Molina). He only tolerates pastimes that will look good on her application form, to the exclusion of those activities that Jenny enjoys. He justifies his strictness by telling her that "things" don’t grow on trees.

And yet the character of David (Peter Saarsgard) seems to appear as if by magic. This "wandering Jew" (as her father calls him) and Gatsby-esque figure is older than Jenny and was educated at the school of life. He suddenly opens up for her a heady world of concerts, society parties and hedonism, and all the "things" of which she used to dream in her bedroom whilst listening to Juliette Gréco.

Intoxicated by this freedom – which is tinged with transgression (for these "things" are stolen by the seductive rogue David – or are "released" in his words, for he too claims that nothing grows on trees) – Jenny feels she is finally living and starts to question the usefulness of her rigorous education. Moreover, according to one of Jenny’s new adults friends – a stupid blonde who introduces her to the life of a kept woman – such an education is not particularly recommended.

When David asks to marry her, the short-sightedness of Jenny’s decision is compounded by the fact that it is never really clear what path an intelligent young woman like herself should take. And she doesn’t for one moment consider her independence.

This is because the film is set just before women’s lib, as the director points out. Jenny, and her mother for that matter, are attracted by "the good life" that a man can offer them, because the prospects available to educated women are still limited and Jenny doesn’t envy the austere life of her female teachers (one of whom is played by Emma Thompson).

The fever is already there but the field of possibilities has not yet opened up. For all the characters, "an education" (scholastic or practical) is essential but how does one decide which type when the goal is not clear? An Education is a delightful portrait of a fading era.

more about: An Education

A Serious Game: Total eclipse of the heart

Felix van Groeningen in competition at Sundance with Belgica

Global strategies for film financing and distribution tackled at Cannes 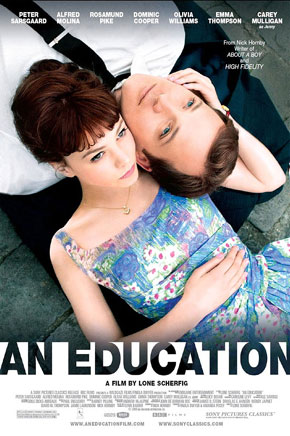 The filmmaker discusses her debut feature which sees Emmanuelle Béart playing the wonderful part of a woman who is looking to start over, resonating with French cinemas as they await their reopening