16/03/2009 - The Oscar-winning Spanish director pays tribute to his own work in a passionate drama with elements of thriller and comedy, which is his most ambitious film to date

Shooting on the €12m film lasted almost four months and involved a team of 175 people, travelling as far as the dark sands of Lanzarote in the Canary Islands. The resulting work is a torrent of sensations with a puzzle-like structure, lasting just over two hours, which will captivate fans of the Volver [+see also:
film review
trailer
interview: Agustín Almodóvar
interview: Carmen Maura
interview: Pedro Almodóvar
interview: Pénélope Cruz
film profile] director, draw tears from sensitive viewers and amuse those who are unfamiliar with the director’s more comically transgressive side (which he cultivated during the 1980s).

In Broken Embraces [+see also:
trailer
interview: Pedro Almodóvar
film profile], the director skilfully, harmoniously and elegantly manages to combine three genres (drama, comedy and thriller) without detracting from the mystery, humour, tone and, most importantly, emotion. This is partly accomplished by a script as enthralling as that of Tie me Up! Tie Me Down!, dialogues worthy of Women on the Verge of a Nervous Breakdown and an enigma to be solved, a terrible consequence of the weak human condition, as explored, for example, in Law of Desire.

In order to absorb viewers in the themes that fascinate him – including jealousy, fiction, revenge, desire and paternity – Almodóvar has focused the central conflict on a film director, Mateo Blanco (played by Homar), left blind after a fatal accident in which he lost not only his sight, but also the love of his life. This tragedy – which led him to change his life and name (he now goes by the name of Harry Caine) – continues to be shrouded in mystery, despite the time that has passed.

However, the arrival of a wealthy and capricious young man (Rubén Ochandiano) – who wants to work with him – opens up past wounds and the black box containing the answers he needs to keep alive his love of cinema and – through film – his love of life.

The film thus describes the protagonist’s brutally fragmented life – like the torn photos of an irretrievable time – after his passionate love affair with actress Lena Rivero (Cruz), who is married to the tycoon Ernesto Martel (Gómez). The latter is so afraid of losing her that he agrees to produce Mateo’s film, so that she can star in it. The director’s loyal and long-suffering assistant Judith (Portillo) plays a role in the tragic ending of this love triangle.

With all these soap-opera style elements, Almodóvar has constructed a sophisticated homage to cinema, with many films within films, including his own work. At the risk of appearing egocentric, the La Mancha-born director, with knowing winks, gives viewers the pleasure of looking back over his filmography and, above all, communicates his boundless passion for his favourite films, his subversive characters and extreme passions, which are larger than life. Here, Almodóvar’s style is expressed in all its glory.

"My love letter to cinema"

Journalists from across the world attended the Madrid screening of Broken Embraces, launching the film’s international career

The Oscar-winning Spanish director pays tribute to his own work in a passionate drama with elements of thriller and comedy, which is his most ambitious film to date

Penélope Cruz to be one of Pedro Almodóvar’s Parallel Mothers

Pedro Almodóvar unveils the cast of his new film, Julieta 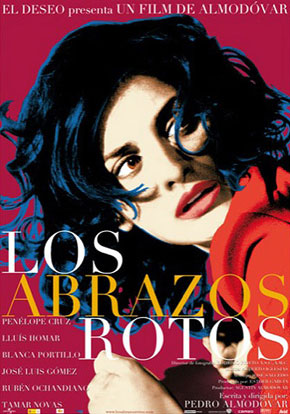