30/03/2009 - Two characters on the edge of the abyss, a man and a girl who risk their lives to the very end in a tense thriller written and directed by Spain’s Patxi Amézcua

While Woody Allen’s comedy Vicky Cristina Barcelona [+see also:
trailer
film profile] offered a colourful, photogenic and sunny image of Barcelona, 25 Kilates [+see also:
trailer
interview: Patxi Amézcua
film profile] (“25 Carats”) reveals the city’s other side. Barcelona’s dirty, tumbledown, rusty and industrial corners – where corruption eats away at both the surroundings and the characters – is the protagonists’ territory in this US detective style film.

Patxi Amézcua’s ever-restless camera follows Abel (Francesc Garrido), a man who feels so bewildered after his wife’s death that he has to leave his son in the grandparents’ care because he can’t even look after himself. He’s a small-time thug who earns a living collecting money from his boss’ debtors, using less-than-legal methods such as wrecking their vehicles. He is a man without a future or ideals, a survivor who struggles through life…until he meets Kay (Aida Folch).

Kay is the daughter of Sebas, a clumsy, scheming and selfish small-time crook (Manuel Morón). She also survives on the corrupt streets, by deceiving drivers and stealing their cars: she fakes an accident so they get out of their vehicle, while she drives off with the booty. But one day her ploy goes wrong and when it looks as though she is about to be caught, Abel comes to her aid.

This encounter between two wounded animals – two outlaws, two pariahs in a cruel and inhuman society, this jungle where they are two wild creatures fighting with all their might – brings them the hope they need to react. It also gives them the energy and complicity needed to make that final leap, in order to escape from the black hole in which they find themselves. They make a final effort, risking everything but standing to gain something resembling their dream life.

With his edgy camerawork and furious editing, Amézcua gives shape to this story that stands out in the Spanish film landscape. A master of the thriller thanks to his experience penning scripts for Arián’s Journey and Trastorno (“Disorder”), the director reveals his talent for genre films (whether horror or detective), for creating suspense and intrigue, and peppering his work with twists and surprises.

This talent is nourished by the detective novels of Raymond Chandler, Dashiell Hammett, James Ellroy, and other US authors. Amézcua also has a passion for film classics including Billy Wilder’s Double Indemnity, John Huston’s The Asphalt Jungle, Sam Peckinpah’s The Getaway and Roman Polanski’s Chinatown, and contemporary titles such as Curtis Hanson’s L.A. Confidential, Michael Mann’s Heat, Sam Mendes’ Road to Perdition and Tony Scott’s True Romance. These influences show through in his work. For instance, the tough but sexy Folch, with her haircut and wild attitude, is distinctly reminiscent of Patricia Arquette in Scott’s film.

All these references and Amézcua’s proven screenwriting talent have combined to create a sophisticated and well-constructed plot, with surprising twists. This is strengthened by central and secondary characters that avoid stereotypes and are plagued by personal and family conflicts.

As the genre requires, action naturally takes pride of place in a film that also contains the right doses of romance and sex. This well-orchestrated action, coupled with frantic editing, reflects the tension suffered by the protagonists, a couple of wounded wolves who finally glimpse a light to guide them out of their dark den.

Two characters on the edge of the abyss, a man and a girl who risk their lives to the very end in a tense thriller written and directed by Spain’s Patxi Amézcua

“Adrenaline and tension on a dynamic shoot”

The 40-year-old, Pamplona-born screenwriter, who trained in Los Angeles, makes his directorial debut with a thriller that opened the Zonazine section at the 12th Malaga Film Festival

The Galician director and actor are filming together again, following Retribution; their new film, set a century ago in the world of gangsters in Barcelona, is just about to start shooting

Patxi Amezcua is working on his second thriller, Séptimo

Entirely shot in Argentina at the end of 2012, the El Toro Pictures and Ikiru Films production with Telecinco Cinema and two Argentinian businesses stars Ricardo Darín and Belén Rueda

Three Spanish-produced projects took part in the recently closed sixth edition of New Cinema Network, the co-production forum at the Rome International Film Festival. These are Seventh, another...

The recent Toronto Film Festival proved very fruitful for international seller Imagina International Sales. This is thanks in particular to two auteur films, Gordos (“Fat People”) and Map of the...

Turning out one film every three or four years, with no flops, Fernando León has a filmography studded with popular and critical successes. These include his debut work Family (winner of a Goya... 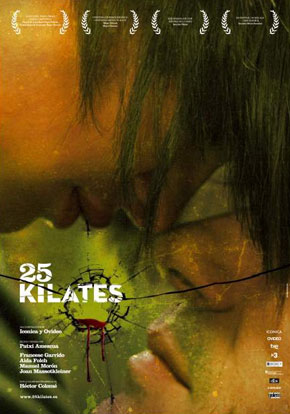