The «Crédit d’impôt» in France

CNC, Caroline has been in charge of examining the applications made by producers for access to automatic support for the production of long features.

Which CNC aids are available to French production?
The CNC’s support account for 2007 was €505.57 million. T his is raised from tax on the price of the cinema ticket (€121.07 million), on T Vs (€349.56 million), DVD sales (€32.24 million) and other funds (Ministry and professional contributions of €0.70 million).
The support account is shared out between aid for the cinema (€256.87 millions) and audiovisual aid (€224.44 millions). The two systems are completely separated. A producer who obtains support funding for the audiovisual cannot use this aid for the cinema.

The CNC holds a privileged position not only in financing the audiovisual industry, but also because of its role in regulation of the sector. From the vantage point of your experience in observation of the French animation industry, what evolution has taken place in the financing structures of French productions?
If we consider the evolution of the structure of financing plans for films over the last 5 years, we see a noticeable increase in the producer’s share in financing: 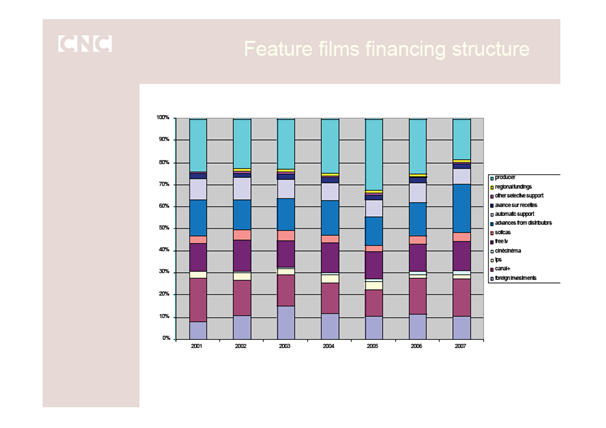 We observe a peak for foreign co-productions in 2003. Beginning in 2004 the share of foreign Co-production falls off, thanks in particular to the installation of the tax credits system in France.
The other large blocks of financing are represented by Canal+, TPS (the second French TV pay-channel), Cine Cinema, the French TV broadcasters, the Soficas and MG provided by the distributors.

How have you reacted in response to the reduction of involvement of the TV channels?
The main measure was the creation of tax credit and the increase in regional aids. What is apparent is that the financing a producer could find in France was declining from 2001 until 2005, and has now risen since 2005 because of the tax credit system.

How does French tax credit work?
The system of tax credit in France, put into place in 2004, follows a logic different to the CNC’s. This scheme concerns manufacture and localisation . of expenditure. Tax credit is granted to a company on the basis of its artistic and technical expenditure in France. The credit is calculated at the close of each financial year. It is deducted from the company tax on benefits. If the company does not have benefits, the tax credit is paid by the State. The rate of tax credit is 20% of the eligible expenditure, to a limit of €1.200 per minute for animation.

The projects are selected by experts according to technical criteria (the balance of expenditure with regard to the whole project).

For films, the conditions of eligibility are the following:
- They must be European (an 18-point system exists, the film requires 14 points at least);
- A minimum of expenditure in France must be reached, based on a scale of 100 points.

Automatic support is calculated on the success of the film. The CNC takes a percentage of the sum generated by the film and uses it to aid production. Each cinema ticket generates around € 60 centimes. The CNC also takes 10% of the sum paid by the distributor to buy the film, and 4.5% of the video edition.