According to global media market analysts Screen Digest’s new report, Digital Cinema moves into the mainstream, the rapid progress of the digital cinema conversion in many countries is requiring an equally rapid appraisal of how to cover costs for those cinemas that may not fit into a commercially-funded conversion model.

There are 32,600 screens in Europe (excluding Russia), of which around 23,000 are targeted by private companies for a commercial rollout (backed by the US studios), and a further 4-5,000 screens will organize their own rollout directly (essentially larger circuits), leaving around 4-5,000 European cinema screens that need to find a funding solution outside of these routes.

The overall conversion to digital will cost Europe an estimated EUR2.1bn, of which the commercial model (known as the Virtual Print Fee model and itself being adapted to bring in a wider number of screens) will fund EUR 1.65bn.

This leaves a ‘digital shortfall’ of EUR 450m, which needs to be found for these extra screens. This does not mean these screens are necessarily at risk of closure, but it does underline that other approaches must, and are, being found. Art-house screens, part-time cinemas, multi-arts venues, and repertory cinemas are the most at risk of failing to find funding for conversion to digital.

The funding group approach is being undertaken in the UK and Netherlands, bringing together a group of exhibitors to use scale to organise a rollout. The more traditional support fund is also being explored in many countries, such as France, Germany, Finland, Sweden, Czech Republic and Poland.

A support fund is also being prepared by the European Commission’s MEDIA Programme. Both France and MEDIA are also exploring a guarantee system, which will underwrite loans granted to smaller exhibitors for digitisation. Italy is the sole European country to offer a tax credit to exhibitors buying digital cinema equipment as an incentive to convert.

A Polish group in the Malopolska region has digitized using tourism funding from the European Regional Development Fund, creating a network of digital art-houses, offering local communities a wide range of programming in the cinema space.

David Hancock, Head of Cinema, Screen Digest, and the report’s author says “The creativity that Europe is known for is being shown more than ever in the approach to digital cinema conversion. In the past year, policy-makers have woken up to the fact that they may be needed to help a small number of screens to convert, specifically those that won’t fit into a mainstream model. The wide range of approaches reflects the diverse nature of Europe’s film industries”.

There were 5,333 digital screens in Europe at end first quarter 2010, a rise of 16 per cent over end 2009, of which 4,529 were in Western Europe. This translates to 15 per cent of the continent’s screens, and has been driven largely by digital 3D (75 per cent of digital screens are equipped with digital 3D). However, with the recent series of commitments to conversions by major European circuits, a momentum is building behind the wider 2D digital conversion. 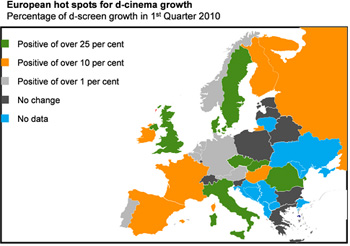