On the occasion of the 61st Berlin International Film Festival the European Audiovisual Observatory releases its first estimates for European cinema attendance in 2010. The Observatory estimates that total admissions in the European Union dropped by 2.0% to around 961 million tickets sold.

Outside of the EU, the Russian Federation continued its impressive growth trend of the past years with admissions growing once more by 19.5% to reach 165.5 million tickets sold, making it the third largest cinema market in Europe in terms of cinema attendance, almost reaching the size of the UK market. 2010 also proved a successful year for the Turkish cinema market where admissions grew by 11.3% to 41.1 million, the highest level in years. 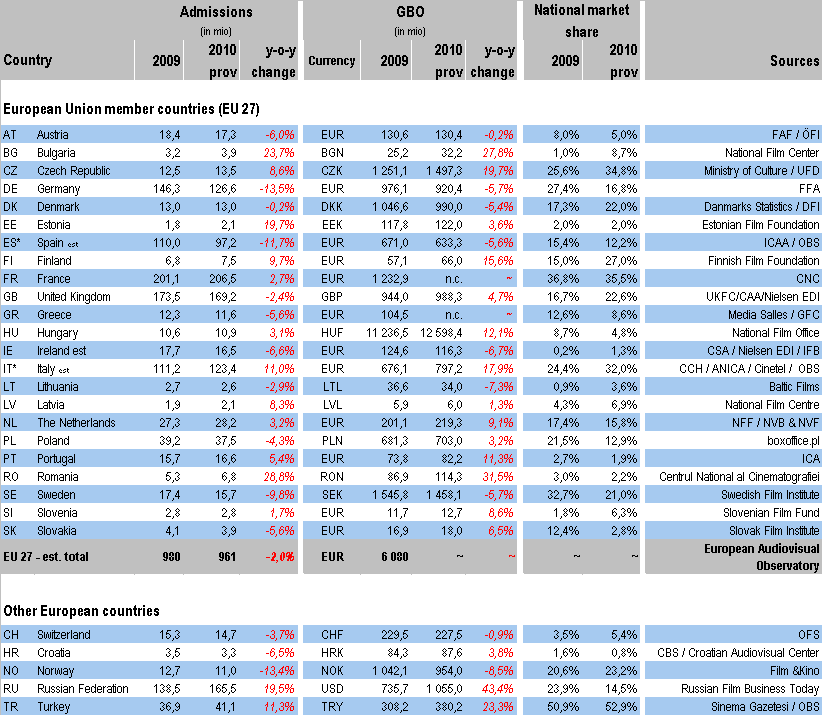 No general pattern for national success of European films

Just as overall theatrical markets performed very differently across European markets, so did national films with national market shares decreasing in 13 and increasing in 10 of the 23 EU member states for which data were available.
Among those countries where national films performed particularly well in 2010 were the Czech Republic and Italy. Italian films took 32% of total admissions (up from 24.4% in 2009) which is even more impressive in light of the strong overall growth of cinema attendance in Italy in 2010. Led by Benvenuti Al Sud, the Italian remake of Bienvenue chez les Ch’tis, which became the top-grossing local film of all times, national films accounted for four out of the top 10 films. In the Czech Republic local films achieved a market share of 34.8% and– along with US 3D blockbusters - contributed significantly to driving a overall box office growth. Local films accounted for five out of the top ten films and Jirí Vejdelek’s comedy Zeny v pokuseni (Women In Temptation) lead the charts ahead of films like Avatar or Harry Potter.

On the other hand 2010 proved to be a particularly difficult year for German films with admissions to local films almost halved from about 40.1 million in the previous year to an estimated 18.8 million tickets, thereby accounting for almost all of the overall downturn in admissions. Looking outside of the EU, Turkey remained the leading European country in terms of national market share with Turkish films taking 53% of total admissions in 2010.