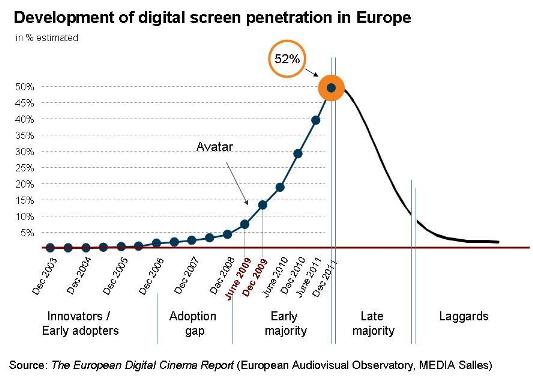 While the initial phase of large-scale digital conversion during 2009 and 2010 had been more or less entirely driven by 3D installations, roll-out in 2011 was – for the first time – driven by 2D screens. This suggests that roll-out has entered its second major phase and is now driven primarily by full conversions of larger circuits under VPF schemes and by public initiatives ranging from legislation (France), publicly funded industry-wide conversion schemes (Norway and the Netherlands) to direct public funding schemes, 60 of which have been identified at national, sub-national and pan-European level, including the new MEDIA 2007 scheme.

Analysis based on a comprehensive site-by-site listing of analogue and digital cinemas as of 2010 clearly shows that small cinemas and exhibitors have significant problems converting to digital. By the end of 2010 only 11% of single-screen cinemas had installed a digital screen, compared to 89% of multiplexes (see table). These small cinemas, however, form a characteristic part of the European cinema landscape, with single-screen cinemas alone accounting for almost 60% of all European cinemas. Though presumably not vital for overall box office results, these smaller cinemas play an important social and cultural role in many communities. The fact that these screens have not yet converted highlights the fact that commercial financing models cannot cover all European cinemas, causing a funding gap for between 15% and 20% of European screens.

At the same time, given the high penetration rates in various European markets, the end of 35mm distribution seems to be approaching rapidly. Distributors in Belgium, Luxembourg and Norway, which was the first country worldwide to become fully digital in mid-2011, were expected to end 35mm distribution as early as 2011/2012 and a total of 11 territories had converted at least 50% of their screens by mid-2011, including the two leading markets France and the UK.

Once large distributors switch to digital distribution in such major markets, demand for film stock will drop significantly, putting pressure on 35mm economics on a pan-European level. This could cause financial strain for those distributors and exhibitors still depending on it. Many of these are presumably small companies now faced with a growing competitive disadvantage: digital cinema increases the economies of scale related to both film exhibition as well as distribution so bigger companies stand to benefit more than smaller players from the transition to digital, both in terms of cost savings as well as in increased revenue potential. This economic reality will ultimately lead to fundamental change in the fragmented European theatrical landscape and poses a challenge to the European independent sector, characterised as it is by a large number of small exhibitors and distributors.