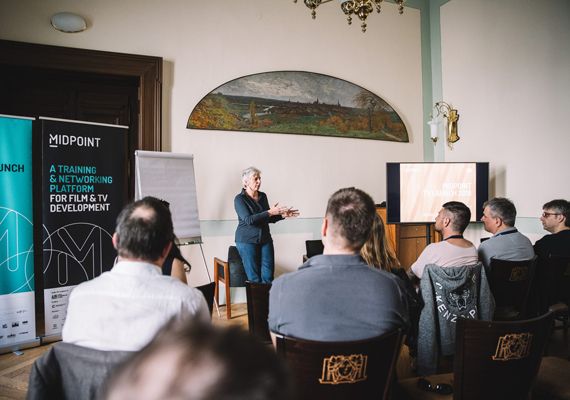 MIDPOINT’s development programme for episodic series, TV Launch, has passed the second milestone of its current edition with a number of intensive sessions that took place in the Czech Republic. The class of 2018 (see the news) met face to face with their tutors, Gabor Krigler, Maggie Murphy, Rumle Hammerich, Steve Matthews and Jacqueline de Goeij, with a tiny change to the programme, as the project Promotion was replaced by the Serbian project Anatomy of Crime. “It is a good line-up, as the projects are thematically rich and resonate with our times and our society,” says Gabor Krigler, of HBO Europe, about the projects in development. “I think that at our market, nobody wants to make anything commercial, but everybody is driven by an urge to say something about our world and go beyond pure entertainment.”

Rumle Hammerich, a director, producer, former director of Danish television station DR’s Fiction department and creative director of Nordisk Film Production, talked about a director’s role and responsibility in a TV series production. Steve Matthews, executive producer of Drama Development at HBO Europe, walked participants through the process of pitching, development and production, while alerting them to what is definitely to be avoided.

Belgian producer Jacqueline de Goeij made use of her own experiences to warn the participants about the pitfalls of co-productions in the master class “Looking for Partners in the Television Landscape While Keeping Everyone Happy” and the session “Pitches, Bibles, Pilot Script”, shedding light on various practices with examples from her own projects. Maggie Murphy, head of Shaftesbury US, revealed the current stage of the workshop to Cineuropa. “We have been working with students for six months, we have a script, and we are working on series documents and selling and pitching the projects.” When asked about the difference between this and other programmes, she replied, “What is different in this programme is that they take their time; it lasts a year.” TV Launch is designed as an “idea-to-market” event – ie, taking an idea through the development process while also tackling the business side of things.

“First of all, the participants are introduced to the market, which is good,” remarked de Goeij. “In the first workshop, the project is assessed on the content level and the script level, and then they developed it. Now, at the second workshop, they will start to think about how to present it to the people in the market.” The TV Launch programme and tutoring sessions also continue in-between the workshops on an individual basis with each tutor. “I am working on the projects with them, Skyping, emailing, writing notes on outlines,” Murphy revealed, adding that the tutors are always willing to offer feedback. The approach is highly appreciated by the participants. German writer-producer Eike Goreczka, who is working on the project The Evil Good, welcomes the availability of the tutors, and he revealed that the individual sessions encouraged him to expand his original miniseries into an ongoing series.

Projects from previous editions (see the news) also moved on: Marjan Alcevski, who is behind the project Nuts, won the HBO Adria competition with another project and is currently shooting Uspjeh; Sky Germany has greenlit Hausen (see the news); 1989 was supported by Creative Europe MEDIA and the Slovak Audiovisual Fund; and Glycerin won a Special Mention at CineLink Drama in 2017.

The last workshop will take place in Sarajevo in August, and this is where the best projects will be awarded.

Crítica: The Good One