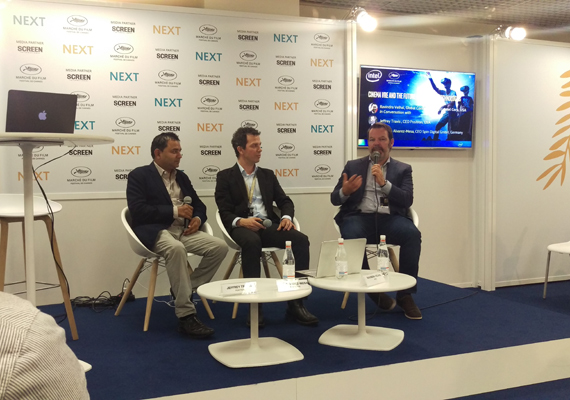 On the second day of the Cannes Film Market’s (8-17 May) NEXT section (8-13 May), one of the hot topics of this year’s edition was discussed. Organised by Intel, the “Cinema VRE (Virtual Reality Experiences) and the Future of Immersive Technologies” conference was dedicated to the crossover between cinema and the VR breakthrough.

Presented and moderated by Ravi Velhal, Intel’s Global Content strategist, the conference opened with a brief introduction to the implementation of Intel’s technology and know-how in the world of virtual reality. With estimated profits for VR close to $80 billion by 2020 and almost doubling to $150 billion by 2025, Intel is consolidating its position in the market. The highlight for the US corporation is probably the volumetric studio that it is currently building in LA, which will allow a more efficient application of the multi-layered experiences that VR offers.

The discussion also extended to VR editions that started off as spin-offs of famous films but now serve more as experiences that are complementary to the cinematic one – some examples offered were Spider-Man Homecoming and Christopher Nolan's Dunkirk [+lee también:
tráiler
ficha de la película], the VR version of which Intel was part of. The topic was explored in more depth with A R Rahman’s upcoming VR experience Le Musk (India), which was shot in Rome and is already available to view at NEXT. The experience takes full advantage of Positron’s full-motion VR chair that allows the user to enjoy an immersive experience of the film using all the senses – even smell. Jeffrey Travis, CEO and founder of the company, gave an overview of the technology.

Mauricio Alvarez-Mesa – CEO and co-founder at Spin Digital Video Technologies GmbH – explained how his company develops high-performance video codecs for the next generation of high-quality video applications, enabling ultra-high-quality video applications such as 4K and 8K UHD. Spin Digital, which is also part of the newly launched pan-European immersive media R&D project Immersify (see the news), explained how the technology is applied, for example, in PSNC – Poznan Supercomputing and Networking Center’s video wall, which uses 45 4K screens for extreme experiences, and in Ars Electronica Futurelab’s Deep Space room, where two 8K projectors positioned in the floor and on the wall offer a feeling of exploring the VR content from within as a completely unique experience.

All three panellists agreed on the necessity to bridge the world of technology with that of creation, and certainly, initiatives like NEXT are helping to achieve this goal, as innovations that previously had “scientific only” applications are now finding their way into cinematic VR experiences. As Alvarez-Mesa underlined: “Bringing together scientists and content creators is the most important aspect of our work.” Travis added: “Believing in VR storytelling is an exciting, collaborative moment.”