Forest Giant [+lee también:
tráiler
ficha del filme], the third feature film by the Finnish director Ville Jankeri (Gold Digger [+lee también:
tráiler
ficha del filme]), world-premiered at Haugesund prior to its release at home on 11 September. A kindhearted drama with a social justice angle and a humorous spirit, it should play well for local audiences and could draw some interest in other Nordic territories as well.

Our hero is Pasi (Jussi Vatanen, dedicated and convincing), head of development at a large milling company in Helsinki. He is hoping for a promotion as he shops for a new apartment with his pregnant wife Linda (Sara Soulié). When his glacial boss Katariina (Anu Sinisalo) sends him to his hometown of Törmälä to execute layoffs at the local plywood mill, he complies, although the last thing he wants is to get back to the place he worked so hard to get out of and bring misery to his childhood friends and acquaintances.

When we meet the mill workers, the foreman has just informed them that they’ve scored a new production record – yet this is of no concern to a corporation that has thousands of such operations around the country. However, Pasi finds a way to turn the decision around, which involves building a railroad and hiring more workers. For this to work, there are political issues to deal with, which means that Pasi enlists his childhood best friend Janne (Hannes Suominen) to run in the local elections. If he wins, there is a chance that the Törmälä mill will not only survive, but attract investors and hire even more people.

The audience-friendly set-up that many viewers will relate to is based on the contrast between the ambitious Pasi and the inert Janne, the capital and the rural province. As Pasi tells his wife, "They are not like us. They listen to heavy metal and eat fish sticks." So when Pasi visits his friend, the only question Janne has while he carries the first of many glasses of booze for the night, is "Maiden or Metallica?"

The old camaraderie is back and Jankeri supports it with flashbacks to the 1980s, including a urine joke related to Pasi's nickname - a nice touch and a nod to broad Nordic comedy in an otherwise very decent and family-friendly film. The inevitably nostalgic trip down memory lane is, however, not all that sweet, and the notorious Finnish alcoholism is dealt with as more than a gag, providing insight into the hero's personality and reasons to both love and hate his birthplace.

Forest Giant is a handsome production, with a lot of attention paid to details of set and costume design, somewhere on the border between realism and stylisation. The cinematography by Aarne Tapola is disciplined but varied, using both handheld and static camera, while the somewhat murky lighting in the flashback scenes contrasts nicely to the sharp images of the present day.

Based on a novel by Miika Nousiainen, the script co-written by Jankeri and Timo Turunen is quite traditionally structured, and the ending is a happy one while still remaining relatively plausible with a clear anti-corporate statement.

Forest Giant is a production of Helsinki-based company Solar Films, and is distributed in Finland by Nordisk Film. 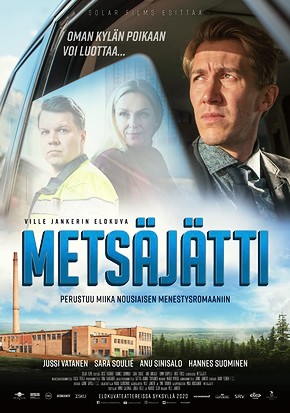