Gender, identities, truth: what is a woman, a man, a mother, a father? And “if it works, how will you live that? What will people say?” By tackling, in fiction, the ultimate symbol of femininity and the taboo of the perspective of a pregnant man (his own and that of other people on him) in A Good Man, recipient of the Cannes 2020 Official Selection label and just screened at the 45th Toronto International Film Festival, in the Industry Selects programme, Marie-Castille Mention-Schaar was taking a lot of risks. Because beyond the potential polemics around such a “touchy” subject, the credibility and the integrity of the entire project was only hanging by a thread on paper, even though the French filmmaker had already demonstrated her talent for seducing audiences around delicate topics in Once in a Lifetime [+lee también:
tráiler
ficha del filme] (the transmission of the knowledge of the atrocities of the Nazi concentration camps to younger generations) and Heaven Will Wait [+lee también:
crítica
tráiler
ficha del filme] (the islamist radicalisation of western teenagers). This time, the step to make is even higher, but the director largely wins her bet, thanks to an excellent script (written by the director together with Christian Sonderegger, who is familiar with the topic since he had dedicated his documentary Coby [+lee también:
crítica
tráiler
ficha del filme] to his trans step-brother) and to a remarkable performance from Noémie Merlant in the role of Benjamin, well supported by Soko (who plays Aude). Qualities which help the film delve into a profound empathy for this couple which would like, just like other people, to make their desire for a child a reality, but who faces dilemmas that are out of the ordinary. 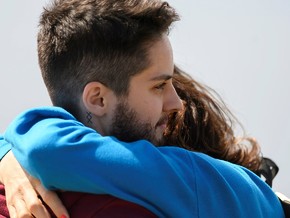