Invisibility in the eyes of society is transformed into a superpower in Zero, the new Italian Netflix original series created by Menotti (They Call Me Jeeg [+lee también:
crítica
tráiler
making of
entrevista: Gabriele Mainetti
ficha de la película]), based upon an idea by the writer of Angolan origin Antonio Dikele Distefano. This eight-episode production sees an Italian series placing a young, Italian man of colour at the heart of its story, for the very first time, supported by a wholly multicultural cast of young, second generation immigrants, to tackle themes such as diversity, inclusion, gentrification and the sense of belonging within an outer suburb of Milan which has never been shown before.

Directed by Paola Randi, Ivan Silvestrini, Margherita Ferri and Mohamed Hossameldin, Zero’s protagonist is Omar (newcomer Giuseppe Dave Seke), a young food delivery driver who lives with his father Thierno (Alex Van Damme) and his sister Awa (Virginia Diop) in the district of Barrio, on the outskirts of Milan, and who is often mistaken for something he’s not on account of the colour of his skin: a drug dealer, a street pedlar, a thief… And in society’s eyes, he’s invisible. But Omar is a talented cartoonist, and Anna (Beatrice Grannò, seen in Tornare [+lee también:
crítica
tráiler
ficha de la película] and The Time of Indifference [+lee también:
tráiler
ficha de la película]) - a girl hailing from the affluent Milanese classes with a seemingly perfect life, who Omar knows from delivering her pizzas - will be the one to recognise just how special he is as they go on to forge a close friendship.

One day, however, Omar discovers that the invisibility he feels inside of him every day can be transformed into a genuine superpower: he can disappear at will. His new friends - Sharif (Haroun Fall), Momo (Richard Dylan Magon), Sara (Daniela Scattolin) and Inno (Madior Fall) – convince him to use this extraordinary gift for a good cause: he must save their beloved Barrio neighbourhood from acts of vandalism and from the designs of unscrupulous property developers who want to move people out of the area in order to build new luxury homes. And so Omar becomes Zero, and goes from being invisible to being a hero thanks to his own invisibility.

The reality is that no-one is looking to escape this peripheral zone of Milan where people play basketball in the street, seemingly a carbon copy of Harlem – quite the opposite. The sense of community, the strength of the group and the link between our sense of identity and the place where we grow up are the overriding themes of the story – and these youngsters feel wholly and utterly Italian. But if things aren’t going the way they should, we have to take action. “Open your eyes”, is Omar/Zero and his gang’s motto, “the world pays attention to you if you pay attention to the world, the world looks after you if you look after the world”. The series is a wonderful invitation to actively engage in the world and to believe in yourself, whose fantasy element is incorporated within an everyday context with discretion and a healthy light-heartedness.

Produced by Fabula Pictures (who were also responsible for Baby’s three seasons) with the involvement of Red Joint Film, Zero is a passionate and remarkable series which, with its fresh, youth-culture language and its wealth of rap, trap and R&B music playing in the background, lends visibility to new Italians, their world and their aspirations. Zero is available on Netflix, in all of the streaming platform’s territories, from 21 April. 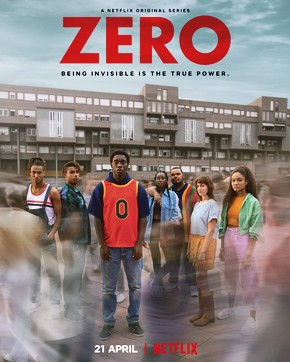 Morgane Dziurla-Petit • Directora de Excess Will Save Us