With Time Before Land, director Juliane Henrich’s alter ego, played by writer Nannina Matz, embarks on a journey to learn about the darker chapters in her family history. The stage for this is a Polish village in the region of Silesia, which was once the home of a distant relative. Henrich’s film isn’t your standard family portrait, as it serves more as a re-evaluation of what genealogy could entail when stretched to its limits. The journey becomes a soothing realisation of how our presence will leave traces for future eyes. The film has celebrated its world premiere at the 64th DOK Leipzig (25 October-31 October), showing in the German Competition.

As the film commences, we see close-ups of a finger pointing convincingly at certain people in an old photograph, as if to say that these are the ones we’re looking for. Puzzled by the question of who they might be, we move to an excavation site, where palaeontologists are carefully chipping away at rocks in search of fossils. The off-screen narration explains how fossils form only if they have been lying in water, and the water may have also moved them from where they originated. Things tend to move around over the course of history, it appears. This is a theme that Henrich keeps returning to throughout the film, as she closes in on her family history. Gradually, we learn that Silesia now mostly lies in Poland, but it shifted during the wars. Our protagonist talks to people of German and Polish descent, who, after the end of World War II, were forced to leave their homes. She tells us explicit accounts of Nazi officers, whom she suspects her grandfather to have been sympathising with. This place seems to be an intersection of many different histories, slowly forming layers over time. And although her search has a clear premise, she drifts further up the much grander scale of things.

Matz investigates and observes, until she literally tries to merge with the surroundings when she wants to insert her feet into the cracks in some old concrete. Does she want to be a fossil herself? The fact that she is wearing white Converse All Stars enriches the contrast between the two scales of human life and of the Earth as a whole. Here, she veers into a place where time seems elastic. She encounters dinosaurs, fossils and exhibitions on Neanderthals. These, she concludes, are all relevant traces, as she convincingly connects her family tree with a page that must have come from a dinosaur encyclopedia.

What we slowly come to realise is that, like the fossils, none of the traces she has found actually originated there. In a way, it is numbing, as this perspective renders her search itself almost irrelevant. “People will be extinct anyway,” we hear her say, becoming nothing more than additional traces left in the Earth’s strata. When sitting at a local market, watching kids as they buy plastic dinosaur toys, we can see her thinking about future palaeontologists excavating these figurines from the ground. It confronts us with the hastiness of our own existence, and although it can make us feel powerless, it also brings us into the here and now. Her stroll around the village is open and receptive: she takes it all in at a gradual pace, allowing us to join her. We pass landscapes, monuments, exhibitions and dinosaurs, as if taken there by a steadily flowing current, all the while wondering where we would end up ourselves.

Time Before Land was produced by Thomas Kaske for Germany’s KaskeFilm. 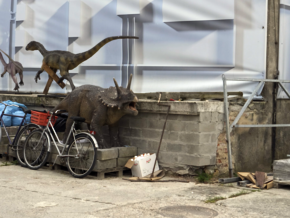