“I hope you’re not here to disgrace your motherland,” a woman shouts across the main square of the small Russian border town of Jutanovka. The party being addressed, director Aleksey Lapin, sitting at the centre of everyone’s gaze, tries to appease those who have gathered for this public announcement, all feeling that same craving for excitement as one would experience at a theme park. “It’s about the history of the city and its people,” is the vague response. This is also all the citizens can evoke when trying to summarise what the upheaval of the outside world, which has awoken the village from its slumber on the edge of civilisation, represents.

“Something historical” is, however, not really the focus of Lapin’s feature debut, which screened at the 59th Viennale, in the Features section. The title of the film, KRAI [+lee también:
tráiler
ficha de la película], translates as “ground” or “land” in English, and it is the land and its people that drive the narrative. The Vienna-based Russian director manages to paint an unpretentious, engaging portrait of the village and its daily life. It’s a village with which he has bonds through his family, but as someone who has never lived there, he counts as an outsider, merely observing.

There is no plot except for the film crew inserting themselves into the footage, scouting for locals willing to become actors in this “historical movie”. This set-up is clear from the opening sequence, in which an old man approaches Lapin and his cousin, Seva, who are gathering mushrooms in the backcountry of Jutanovka. He can recite poetry, he promises, as he immediately embarks upon a long monologue of dramatic prose. Several people approach Lapin throughout the movie’s running time, asking to be part of a feature they know nothing about. Lapin asks a 15-year-old girl why she wants to participate. “I want to be famous,” she responds.

But the director does not fall into using the lazy trick of making a plotless movie within a movie. His presence amidst the town’s everyday life and the strolls that his cousin Seva goes on serve as a way of inserting us into the loop of day-to-day existence there. There is an elliptical feel to the editing, whether we’re witnessing Seva’s repeated insistence about a gas leak in the nearby hills which is making people act up, the film crew carpooling from location to location, or the younger and elder generations gathering, illuminated by candlelight or firelight, as the town is hit by a power outage.

The reversion to these anachronistic methods, as well as the older generation comparing this chaos to the post-communist shock of the “wild 1990s”, is prodigious, but the film abstains from overemphasising these moments. Time doesn’t matter in this story. In its geographic detachment from the outside world, there is freedom in not being bound by those standards. The subtle changes that the town does experience lie in the little things: a woman putting up new wallpaper in her children’s bedroom; decades-old cars starting to be outnumbered by newer vehicles; or a young woman learning how to breakdance.

Shot entirely in black and white, and within a sometimes overflowing but still tightly composed 4:3 frame, KRAI not only offers a mesmerising view of the soft, hilly landscapes and the urban sprawl of the town; it also pushes the tight-knit, lovingly observed interactions of the community to the foreground, forgoing the fear that this could in any way be a disgrace to the land of Lapin’s forefathers.

KRAI was produced by Austria’s Horse & Fruits Wien. It is sold internationally by sixpackfilm. 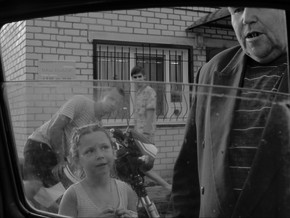 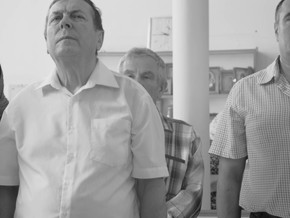