"It's done, I think it's the right time," said Alberto Torregiani, when Cesare Battisti, known in France as a writer of noir novels and convicted in Italy for terrorism, was extradited from Bolivia in 2019 after decades on the run and took responsibility for several murders. Alberto is the son of Pier Luigi Torregiani, a jeweller killed in 1979 by the Pac - Proletari Armati per il Comunismo (Armed Proletarians for Communism) in a shootout in which Alberto himself was wounded and lost the use of his legs. As the guardian of his father's memory, Alberto was a consultant on the set of Fabio Resinaro's film Ero in guerra ma non lo sapevo [+lee también:
tráiler
ficha de la película], whose screenplay, co-written by the director with Mauro Caporiccio and Carlo Mazzotta, is inspired by Alberto's book of the same name. In Italian cinemas on 24, 25 and 26 January with 01 Distribution, this is Resinaro's fourth feature, following the unusual and brilliant debut Mine [+lee también:
tráiler
ficha de la película] (directed with Fabio Guaglione in 2016 and distributed worldwide) and two subsequent titles from Èliseo Entertainment.

Right from the very first sequences, the film relies on the performance of Francesco Montanari (the Lebanese in Romanzo criminale - La serie), who plays the character of the jeweller with ferocity and generosity. Montanari's Torreggiani moves through the Milan of the Lead Years, where robberies by criminal groups and subversive organisations, gun fights, kneecappings and murders were the order of the day. Aldo Moro had been kidnapped and killed by the Red Brigades six months earlier in Rome. Torregiani is a self-made man, a workaholic watchmaker who wants to make the economic leap and is opening a large jewellery shop with a bank loan. He always carries a Smith&Wesson .38 calibre to defend himself and is very good at selling necklaces and rings through a local TV station. He believes in the god of money and has his own principles, has adopted three orphans, helps homeless families in the neighbourhood and finances a youth football team. His wife Marisa (Laura Chiatti) is a bored housewife who reads magazines about women's emancipation and is fascinated by the young “revolutionaries” who call people like her husband “capitalist pigs” on the radio. The clocks that Torreggiani collects in his study and that the director continually frames are a metaphor for the perfectly synchronised mechanism of his life as an upright man, which at a certain point becomes inexorably jammed.

One evening, at the end of an infomercial, Torregiani is in a pizzeria with his family and his collaborator Salvo Lo Russo (Gianluca Gobbi) when two robbers enter. Torregiani and Lo Russo react and one of the criminals and a customer die in the gunfight. The newspapers describe Torregiani as a vigilante, a sheriff on the hunt for robbers. The jeweller becomes a target. To the anonymous and silent phone calls, he replies “go to work, you sons of a gun!” Commissioner Giardino (Pier Giorgio Bellocchio) gives him protection, but he evades it to go and make his TV sales. It is an announced murder, and Torregiani goes to his death, gun in hand, like a sacrificial lamb, as if he were tired of playing that tough guy role. Although Resinaro tries to anaesthetise the political aspect of the story, with a narrative structure and directorial choices that prefer the thriller route, a portrait of a new figure emerges: that of the small upstart entrepreneur who uses the television medium in a hammering way to create need in the consumer, and who will contribute to that cultural flattening and flattening of values that has worsened with time and globalisation. But reconstructing the events without historically contextualising that difficult and confusing period (why were twenty-year-olds shooting people?) makes the film indecipherable for those who were not born in those years and do not know the recent history of the country.

Crítica: Mountains and Heaven in Between

Crítica: A Bunch of Amateurs

Crítica: Talking About the Weather 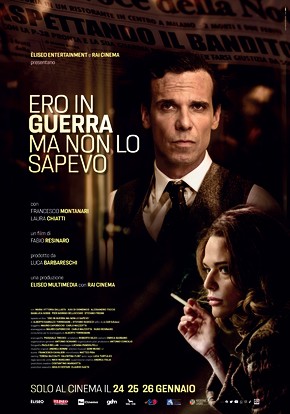 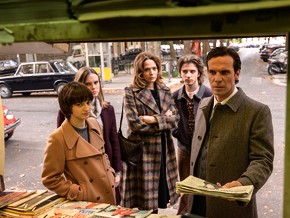 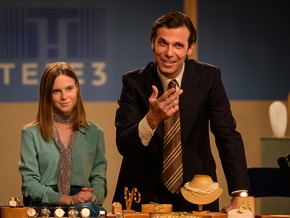 Crítica: Mountains and Heaven in Between

Crítica: A Bunch of Amateurs