Thanks to Austral, his second feature-length documentary, Benjamin Colaux walked away with the Grand Prize from the National Competition of the fifth Brussels International Film Festival (BRIFF – read our news). This visually sublime and emotionally potent documentary (photography comes courtesy of the director himself) follows in the wake of long-distance sailors torn between their fascination for the sea and their life on terra firma in the southernmost reaches of Chile.

At the ends of the earth, three men take on the Southern Ocean and its perils. They leave their families and brave the cold and the storms to travel out to meet fishermen isolated on the infamous islands located in the far south of Chile. They all agree on the importance of perpetuating this traditional, brotherhood of a profession which is at risk of disappearing.

But just as Milton is making a name for himself in the field, despite his strong attachment to his two young children, orphan Andres is trying to leave this uncertain trade and his sailor family behind him in order to fully devote himself to the woman he has only just met. These two stories orbit that of Guillermo who is torn between family wounds and the savage sea, which calls out to him, unrelenting.

The film opens alongside the quayside, to the sounds of a beautiful score blending cello and song, courtesy of musician Claire Goldfarb. With just minutes to go until their great departure, a far-off conversation captures our attention, full of goodbyes and intimacy. Awash with a highly contrasting and majestic black and white tone, the film begins, availing itself of a fictional form to introduce us to its characters. It’s a movie built upon dualities, which sometimes take the form of duos, alternately accomplices and enemies: the land and the sea, men and the elements.

The sailors spend long periods of their lives at sea, where the swell, the waves, the ebb and flow cradle their sadness, as if suddenly their existence were starting to make sense. Danger, ever-present, is a permanent part of their lives. It’s not so much death which frightens them, but the fact of escaping it. Or worse, in some of their eyes, that their demise might happen on land.

Back on solid ground, their certainties slip away: their place in the world, within their families, their legitimacy, their need to be acknowledged, and their guilt; a toing and froing of contradictory emotions gradually tightens its grip. And then there are the others, their loved ones, and those of their friends who have been lost at sea, who endlessly remind them that the sea is also a cemetery. Austral, a long-haul documentary, paints the portrait of a small community which lives, feels, rejoices and suffers in step with the sea, only too aware of its insignificance amidst the immensity of ocean swell and of nature. 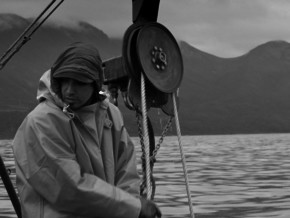