A graduate in social sciences with a master’s degree in film direction (INA), Swiss talent Elena Avdija specialises in casting for extras and for small roles, harking back to her interest in “professions in the shadows” which the film world relies on, sometimes without too many scruples, and which is the focus of her first feature, dedicated to stuntwomen. Behind the glamour which movies, ensemble creations par excellence, never fail to foreground, there are a multitude of professionals who help ensure films turn daily life into pure magic. Although Stuntwomen [+lee también:
tráiler
ficha de la película], which triumphed in the Zurich Film Festival’s Focus Competition, undoubtedly paints the portrait of a profession, it's a portrait which is tinged with devastatingly universal social problems: the depiction of violence and the attraction it has long held, and the (victim-like) image of women on screen, to give but two examples.

We can, of course, expect a film full of spectacular scenes and incredible, striking stunts, but from the outset we realise that the director’s angle of approach is quite different. Stuntwomen is quick to distance itself from film sets so as to enter into the private worlds of three stuntwomen: Virginie, an LA professional par excellence with many years of experience, Petra, who emigrated to the USA where she’s struggling to impose herself in the competitive film world, and Estelle, the “trainee” who left her job as an engineer to embark upon this new adventure. Each of them has their own outlook, both hopeful and disenchanted, on a profession which doesn’t value them despite the risks they take and on a world which often sees them as interchangeable goods. It’s a situation which is anything but rosy, but it never undermines the passion they have for this demanding yet thrilling career.

Important and uncomfortable issues are brought to the fore by this three-pronged portrayal, such as the tendency to depict women as victims of a kind of violence concocted by a male, patriarchal and unoriginally binary imaginary. Physically high-performing, and fearless of the danger (which they know how to manage in a professional manner) and the pain that comes with exposing one’s body to all manner of blows on a daily basis, Virginie, Petra and Estelle have to face facts: the roles they will be offered will almost exclusively consist of victim roles. It’s a paradox which the film makes visible in an intelligent fashion, despite the protagonists trying to push it from their minds as far as possible, either by smoothing the edges of non-stop sexist jokes or by trying to approach their jobs from a purely professional angle. The western-flavoured music accompanying the film’s images, and the shadows which dominate the screen, highlight the concerns inhabiting the protagonists.

In a certain sense, performing the endless victim roles they’re offered means they have to become complicit with film representations based around stereotyped gender violence. But what else can they do? Only powerful, moving and alternative stories like Elena Avdija’s have the potential to shake things up. Instead of sensationalism and violence, the director emphasises the touching fragility of her protagonists who modestly reveal their bruises while hiding the many others they nurse on the inside. Over and above the strength (both physical and mental) that’s required to be a stuntwoman, the director highlights the close bond between her three protagonists, their secrets, Petra’s need for recognition, Virginie’s professionalism, Estelle’s hopes… It’s a touching and authentic portrait which goes far beyond the sensationalism of the subject it explores. 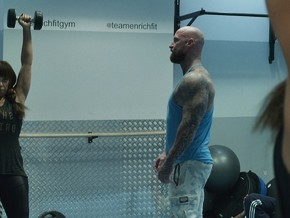