A Batallion of the Spanish 'Blue Division' runs into a desolated landscape; a Cavalry Squadron frozen to death in a lake, their bodies still riding their horses. All but for one. His corpse lies on the ice; his throat slit. Engraved in blood on his shoulder reads 'Watch out, God is Watching You'. Soldier Arturo Andrade, a former police inspector, is assigned to the case. He proceeds methodically with the investigation with the aid of Sergeant Estrada. The clues lead them to conclusions of a perverse vengeance. Everyone is under suspicion, more than 18.000 people stuck in the cruel war. They are facing a serial killer who is a hunter in the snow.

Gerardo Herrero has adapted a thriller novel centred on the División Azul, that army of volunteers sent by Franco to fight on the Russian front during World War II.

"If I hadn’t also produced it, this film would probably not have been made"

One of the leading producers of Spanish cinema has for years combined producing with directing, and now presents his fifteenth film, Frozen Silence: a war thriller shot in Lithuania.

The comedy, based on a stage play of the same name, boasts an ensemble cast toplined by Malena Alterio, Alexandra Jiménez and Fele Martínez

“My film is like a Christmas tale told by Kafka”

Cineuropa talks to Daniela Fejerman at the Seminci 2015, who poured her own difficult personal experiences into La adopción, starring the magnificent Nora Navas and Francesc Garrido

Daniela Fejerman wraps the shoot for La espera in Lithuania

The filming of this intense, personal drama has come to an end; the movie examines the difficulties and ins and outs of a process whereby a Spanish couple try to adopt a child in Eastern Europe

Madrilean Sales agent Latido Film Sales has added Argentinean film Thesis on a Homicide to their Cannes line-up, a thriller from The Secrets in Their Eyes production team.

Never in the last two years have so little people been to Spanish cinemas. The spectator drain for local productions continues.

Rodrigo Cortés’ third feature, starring Robert De Niro and Sigourney Weaver, has made €1.12m at the box office over its first weekend 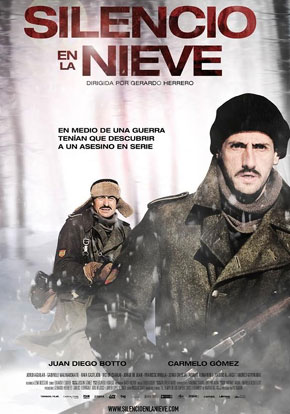