The film critic Tatti Sanguineti arrives in Palermo to find out what has happened to Franco Maresco’s unfinished movie: Belluscone. Una storia siciliana. A film that was supposed to tell the story of the unique relationship between Berlusconi and Sicily through the misadventures of the Palermitan impresario of Neapolitan “neomelodic” singers and organizer of street festivals, Ciccio Mira—an undaunted supporter of Berlusconi, nostalgic for the old days’ Mafia— and two artists in his stable, Erik and Vittorio Ricciardi, who perform in the squares of Palermo a song entitled “Vorrei conoscere Berlusconi” (“I Want to Meet Berlusconi”). The film focuses on three failures: the political and human one of a Berlusconi now on the wane; that of the unfortunate and “slapdash” Ciccio Mira, rooted in an old but tenacious culture; and finally, the artistic one of the director, who chooses to disappear after realizing that tilting at political windmills is pointless, in a country that has long identified with Berlusconian “culture” and probably continues to do so.

Review: The Mafia Is No Longer What It Used to Be

VENICE 2019: The documentary by the derisive provocateur Franco Maresco is filmed in Palermo on Falcone and Borsellino Day and guests-stars the great photographer Letizia Battaglia

The director of Belluscone. Una storia siciliana returns to the Venice Film Festival, competing with his new film which features a cast led by Letizia Battaglia and Ciccio Mira

Polanski, Gray, Soderbergh, Kore-eda, Assayas, Martone and Larrain feature among the biggest names at the festival, which will take place from 28 August-7 September

Among the 34 projects in receipt of a total of €1,525,000 are the new films by Franco Maresco and Pasquale Scimeca

Carlo Verdone, Rocco Papaleo and Edoardo Leo are among those who will be attending the third edition of the film festival celebrating Italian film in the German capital, from 2 to 4 October

Bellocchio, Guadagnino, Caligari and Maresco among the 11 Italians on the Lido

"Customer care has to come together with high quality productions"

Ten more copies for Belluscone, the Golden Lion in cinemas with Lucky Red 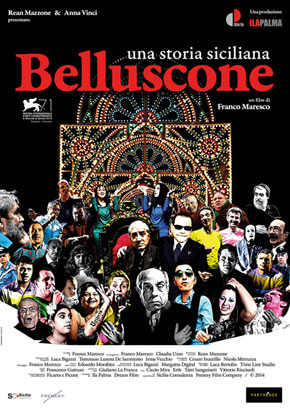