THE GROUND BENEATH MY FEET

Lola is a jetsetting business consultant who excels at the aggressive tactics and nonstop work her job requires. She travels back and forth from Vienna, where her tasteful apartment serves more as mailbox and laundromat than home, to the headquarters of the latest corporation she’s restructuring. Her routine is one of late nights at the office, fancy client dinners and brief nights of sleep in sterile hotel rooms. Approaching 30, Lola is beautiful, works out, and her career seems on a fast track to success.
Lola manages her personal life with the same ruthless efficiency she uses to optimize profit margins. She keeps her relationship with her boss Elise secret, as well as the existence of her older sister Conny, who has a long history of mental illness. But when she receives the news that Conny has attempted suicide, Lola's secrets threaten to explode into the open. As she tries to do what's best for her sister without jeopardizing all she's worked so hard for, Lola slowly finds her own grip on reality slipping away.

more about: The Ground beneath my Feet

Review: The Ground beneath My Feet

Interview: Marie Kreutzer • Director of The Ground beneath My Feet

“Something is wrong, but I don’t want you to know what it is”

BERLIN 2019: Cineuropa chatted to Austrian director Marie Kreutzer about her striking competition title The Ground beneath My Feet

Vicky Krieps leads the cast of Corsage, a co-production between Austria, Luxembourg, Germany and France 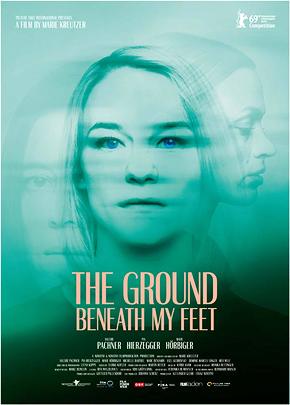