A story composed of fragments of lives lived in the periphery. Based on stories gathered and formed among the people who live in the region, Ridge turns the setting into the film's node and main character. But like shadows over the landscape, some protagonists are distinguished: Beata, a seasonal worker who comes to Sweden for the first time, Aaron, a young man with a broken heart returning to the place where he grew up, and Billie, a girl lost in her first summer vacation. As the film follows their lives, which slowly merge with the landscape, a map is drawn of the confusion between machines, people and animals. It becomes clear how they all depend on each other, in this era where the future is obscured by man's violent imprint on the planet.

The winner of this year’s DOX:AWARD doesn’t provide easy answers, or indeed any answers at all, but after a while you won’t even care 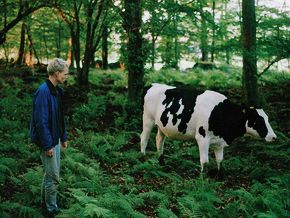