WE ARE THE THOUSAND

Together impossible goals can be reached. Like playing a song as a tribute to your favorite rock band after putting together 1.000 musicians playing perfectly in synch. It’s what Rockin’1000 achieved, a group of Italian friends who quickly became a global community bringing together musicians from all around the world. In 2015, Fabio, a marine biologist with a huge passion for rock music, convinced 1.000 musicians from all over Italy gathering in Cesena to play “Learn to Fly”, the famous Foo Fighters' hit. His aim was to convince Dave Grohl, the leader of the band, to come and play in his town. A video clip of the performance together with Fabio’s speech was published on YouTube and it was viewed more than 50 million times. Soon afterwards Dave Grohl got the message and he decided to make the dream of the thousand comes true by bringing Foo Fighters to play in the village of Cesena. That was the beginning of an incredible adventure that created the hugest community of rock music lovers ever. Over nineteen thousand musicians, amateurs and pros from every age group and social background, united by one passion: rock and roll. Thanks to this experience, a proper rock band was founded named Rockin’1000. It fills up Stadiums all over the world playing rock. We Are The Thousand is the story of Fabio, who created the hugest rock band on Earth. But it is also the story of how the idea of virtuous community can positively influence every single member, encouraging them to pursue their dreams while giving everyone the best they have to offer. We Are The Thousand tells the unique story that changed the lives of many people. Forever.

more about: We Are the Thousand

Anita Rivaroli’s documentary about the tribute paid to the Foo Fighters by 1,000 musicians offers a snapshot of a musical event that oozes pure joy 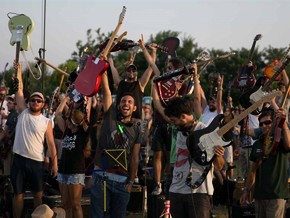