As Hungary’s political climate becomes increasingly radicalized, Virág, a former green politician, loses faith in the pretend-to-be democratic parliament of Hungary and retires from politics. She and her musician partner Nóra decide to adopt a child and focus on building a family together. With a sensitive lens and close access, directors Asia Dér and Sári Haragonics follow the two women through their long and ultimately successful adoption process to bring home their young daughter of Roma origin. But tensions begin to rise between the two as Virág thrives in her role as a mother and Nóra struggles to find her place within the family. As the rising tides of hate and homophobia in Hungary begin to overflow into their family, their lives hit a boiling point and they must face the difficult decision of whether to leave their country behind.

more about: Her Mothers

A raw portrait of a lesbian couple adopting a child in Orbán's homophobic Hungary, this documentary by Asia Dér and Sári Haragonics had its European premiere at Sarajevo

"A rainbow family adopts a child in Hungary"

We talked to directing duo Asia Dér and Sári Haragonics, who took their eye-opening documentary Her Mothers to the Sarajevo Film Festival

Beginning and Her Mothers win at Crossing Europe 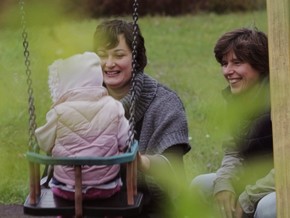 We talked to the up-and-coming Czech-Vietnamese animator and director, whose latest short film keeps reaping awards on the festival circuit

We talked to the Belgian filmmaker, who delivers with his feature debut a marked wink to the US family-friendly cinema of the 1980s