THE YEAR BEFORE THE WAR

The film is like a stylization of silent cinema, connecting political and philosophical extremes of 1913 in a story of a young man participating at the creation of a new world. A mysterious adventurer, who was known as Peter the Lett, gets involved in a tragicomic and surreal race from a routine clerk job and a romantic passion in Riga to preparation of a world revolution in Vienna, psychoanalysis at Freud’s saloon and seduction of Mata Hari in Paris.

more about: The Year Before the War

Dāvis Sīmanis' new feature is a flamboyant, bizarre tragicomedy set in Europe in 1913, rich in surprises and loosely inspired by early silent-era cinema

Interview: Dāvis Sīmanis • Director of The Year Before the War

“From the beginning, I wanted to focus on an eclectic visual style”

We talked to the Latvian director, who presented his third feature film at the International Film Festival Rotterdam

Filming under way on Dāvis Sīmanis' The Year Before the War

The Latvian director began his summer shoot on 19 May, following a winter filming session that took place in early February in Pļaviņas, Riga and Talsi 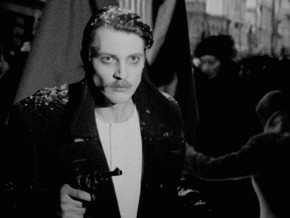