Raul Reyes, FARC's number 2, died in 2008 under the weight of bombs dropped by the CIA and the Colombian army. In the devastated camp, among the corpses, computers with ten years of correspondence of the man who served as foreign minister of the oldest communist guerrilla in the world. An open door in the heart of the sinking of a revolutionary utopia that in its final hours has become a nightmare.

In this animated oddity by Juan José Lozano and Zoltán Horváth, Joseph Conrad’s Heart of Darkness meets You’ve Got Mail

The French sales agent is set to land on the Croisette brandishing Plan 75, enjoying its world premiere in the Un Certain Regard section, and Pink Moon, which was selected to compete in Tribeca

Produced by Dolce Vita Films and Intermezzo Films, this animated film by Juan José Lozano and Zoltan Horvath will be sold by Urban Distribution International 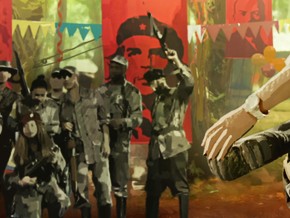