THE FIRST 54 YEARS – AN ABBREVIATED MANUAL FOR MILITARY OCCUPATION

How to succeed in an occupation for at least 54 years? Mograbi, director and narrator, builds the handbook of the perfect occupier based on testimonies from Israeli soldiers and archive footage. 5 million Palestinians live in the occupied territories under Israeli military rule, 2 million of them in the Gaza Strip, under total siege for the past several years. “The Israeli occupation of the West Bank and Gaza Strip has already lasted for 54 years.” This statement does not tell much about occupation. What does “occupation” imply? The first 54 years aims to provide an exclusive insight into the Israeli occupation of the Palestinian people while it is still ongoing. Describing their orders, their missions and their actions, Israeli soldiers witnesses report on the mechanisms of oppression of Palestinians from 1967 to the present day. With these testimonies, they reveal the factory of the occupation machine.

more about: The First 54 Years – An Abbreviated Manual for Military Occupation

BERLINALE 2021: We talked to the prolific Israeli filmmaker about his latest film, in which Israeli witnesses report on the mechanisms of oppression of Palestinians from 1967 to the present day

The films scored the Awards for the Best Berlinale Documentary and Best First Feature, respectively, set to be presented during the prizegiving ceremony on 13 June

Speaking on behalf of a drastically weakened cultural sphere, the Nyon-based festival has developed a strong and unfettered programme despite the sanitary limitations at play 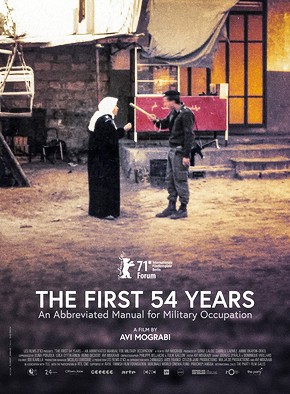