LITTLE PALESTINE (DIARY OF A SIEGE)

During the Syrian civil war, the district of Yarmouk, home to thousands of Palestinians, became the scene of dramatic and ferocious fighting. Little Palestine (Diary of a Siege) is a film that follows the destiny of civilians during the brutal sieges, imposed by the Syrian regime, that took place in the wake of the battles. With his camera, Abdallah Al-Khatib composes a love song to a place that proudly resists the atrocities of war.

more about: Little Palestine (Diary of a Siege)

Abdallah Al-Khatib tells the story of the siege of Yarmouk, a district of Damascus that used to host the biggest Palestinian refugee camp in the world

Abdallah Al-Khatib's first film tells the story of the siege of Yarmouk, a district in Damascus which hosted the biggest Palestinian refugee camp in the world from 1957 to 2018

Review: How to Save a Dead Friend

Raw and moving, Marusya Syroechkovskaya's documentary describes growing up in 21st-century Russia, but is so intimate and honest that it would probably work just as well in a vacuum

The 15th edition of MiradasDoc hands out its awards

Hive is crowned the winner in Montpellier

The film from Kosovar filmmaker Blerta Basholli wins the Antigone d'Or, while the Audience award goes to Anima bella and the Critics' Award to Costa Brava, Lebanon

No One’s with the Calves, Vortex, Olga and Hive come out on top at Filmfest Hamburg

The 29th edition of the German gathering rolled out a purple carpet, and showcased stories about love, hope and the fight for freedom 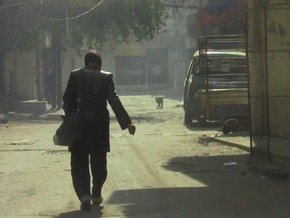