OUR MEMORY BELONGS TO US

Three Syrian activists – Yadan, Odai and Rani – are reunited on stage in Paris almost 10 years after the outbreak of the Syrian revolution. Here, the director Rami Farah, himself a Syrian, confronts them with footage from the early years of the uprising – footage that was smuggled out of the country in 2012, and which they have either filmed themselves or which changed their lives. The three friends met when they became members of a media collective in Daraa, where the revolution started. Today, seeing the footage again allows both them and us to think about the complexity of a popular uprising, which ended in a devastating conflict. In the meantime, several of their friends have been killed in the chaotic conflict while they themselves have lived in exile. But the Syrian war also marks a historic turning point in the documentation of wars around the world and their coverage by the more or less voluntary civilian journalists armed with smartphones and small cameras. The three activists’ reunion with the war and with each other is an experience full of emotions, which at the same time testifies to the courage and strong will of the Syrian people.

more about: Our Memory Belongs to Us

The European laureates at the German gathering included Republic of Silence, A Sound of My Own, Bucolic and among us women 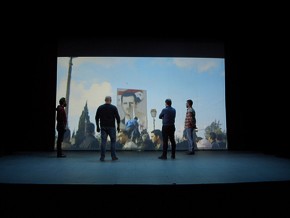