FACTORY TO THE WORKERS

In Croatia in 2005, a machine tools factory was occupied by its workers. Since then, they have operated collectively, becoming the only successful example of a worker occupation in post-socialist Europe. Today, as they seek a new model of collective ownership, the microcosmic world of the factory clashes with the forces of the globalized market economy, having an increasingly brutal impact on wages and the organization of the factory, causing rising disaffection among the workers. Filmmaker Srđan Kovačević returns regularly over a five year period to make a film that charts the evolution of this communal enterprise. Factory to the Workers tells the inside story of the workers who challenged the dominant economic narrative with their actions. After a decade, the same question remains: can a factory in the hands of workers survive at the periphery of capitalism, or do we need a bigger dream?

more about: Factory to the Workers

Once an inspiring example of workers rallying against ruthless owners, the story of Croatian factory ITAS has become a bitter reminder of the unfair market game in Srdjan Kovačević's documentary

Interview: Srdjan Kovačević • Director of Factory to the Workers

The filmmaker discusses his documentary, which portrays the story of Croatian factory ITAS, a bitter reminder of the unfair market game

Aga Woszczyńska’s debut feature has been crowned as Best Fiction Film at the Linz-based gathering, while Best Documentary went to Srđan Kovačević’s film 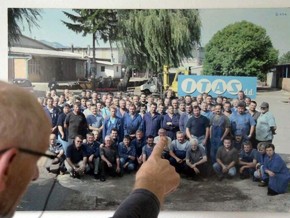