Monte Carlo during World War II. Salomon Sorowitsch, king of fraudsters in a world of gamblers, gigolos and easy women, is forced by the Nazis to use his counterfeiting talents on the trading floor, caught up in a war in which he is destined to perish. Like other Jews recruited in the concentration camps to use their skill for producing counterfeit money, he escaped the worst treatment meted out to other prisoners but was still unsure if he would come out alive.
Based on Adolf Burger’s memoirs of the Nazi period.

more about: The Counterfeiters

The Counterfeiters: Of swindlers and men

Would Stefan Ruzowitzky have shot The Counterfeiters (Die Fälscher) ten years ago? The Viennese director of Anatomy and All the Queen’s Men smiles, stressing his desire to turn the taboos of...

The Austrian film-focused streamer intends to offer up to 1,500 Austrian titles in the DACH region, with plans to expand into non-German-speaking countries later on

A German literary classic, Hermann Hesse’s tale about an unlikely friendship between a monk and an artist hits the screen in its first-ever movie adaptation, helmed by Stefan Ruzowitzky

The Chinese Bridging the Dragon market met up with Stefan Ruzowitzky, the director of The Counterfeiters, which won the Oscar for Best Foreign-language Film 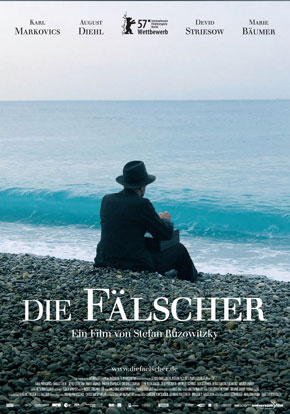