TO FARO (MY FRIEND FROM FARO)

Mel (22) is a young woman with boyish looks and build, whose short hair and baggy clothes hide her femininity. She has a humdrum job, preparing airline food for a nearby airport, and has big plans to escape with her brother Knut (25) and see the world. But Mel’s dreams crash to Earth when Knut tells her his girlfriend, Vicky, is pregnant. His well-intended pressure that she should find herself a boyfriend is shrugged off by Mel telling him she already has one. Except... she hasn’t. Fortunately, Mel has a Portuguese colleague, Nuno, who is happy to take her money and play the part for her at Knut’s engagement party. Unfortunately, he plays the part all too well and Mel’s family is smitten with him, inviting him to come by more often. To which Nuno cannot say no...

more about: To Faro (My Friend from Faro)

Nana Neul, the director of Silent Summer and My Friend from Faro talks about her films and inspirations

Nana Neul has crafted an intimate road movie on acceptance, loss and daughterhood, which embraces low-key moods and loneliness as normal human states of being

German Films’ Scandinavia tour will begin this year in Copenhagen, where it will run from November 24-27. The event opens with Cloud 9 by Andreas Dresen, who will present his film to the public... 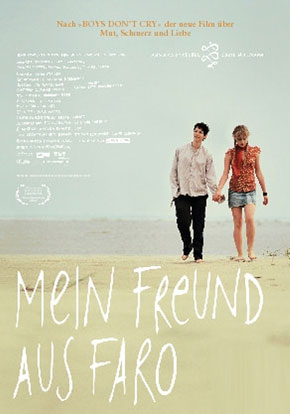