When a film project involving pre-existing literary rights is at an early stage, the producer might option the rights rather than directly license them. Since there is no certainty that the film will go into production it would be too risky to acquire the rights before developing the project and seeking the financing. Conversely, it is more than unlikely that the producer manages to have the film financed without having purchased the rights and, beyond, it would be equally risky not to do so as nothing prevents others from acquiring them while the project is being developed and nothing guarantees that the copyright owner will grant them to the producer when and if the time comes. The option agreement is the solution to this catch-22, allowing the producer to secure the rights and providing him with enough time to develop the project, get the film financed and hire crew and talent while deferring most payments until the shooting begins. This is the most common agreement when licensing the rights for a screenplay or an adaptation.

An option agreement is a contract between two parties, licensor and licensee (publisher, author or screenwriter, and producer), allowing but not obliging the latter to use a given asset (a novel or a script) owned by any of the formers for a determined purpose (the production of a film based on said literary works) within a timeframe (option phase). In the meantime, the licensor cannot revoke the agreement, while the licensee is free to exercise the option at any time or let it expire, notably if the project fails to go into production. When this happens, the agreement is terminated without further liability between the parties and the rights revert to the licensor -unless otherwise stated-, who gets to keep any rate already paid. If, on the contrary, the producer succeeds to produce the film before the option expires, the rights will be automatically licensed to him under the conditions agreed upon signature (licensing phase).

The cost of the rights very much depends on the author’s name and its payment timeline varies considerably from a screenplay to a novel. In the first case, the total cost is divided into several instalments or option fees, payable as certain production milestones are met (i.e.: 10% upon signature, 10% eighteen months after signature, 10% at the beginning of the pre-production, 50% on the day of principal photography and the remaining 20% when the film is delivered) no later than the deadlines agreed for each one. Whereas for an adaptation, the option phase will be divided into two or three periods (of 9 to 12 months each), for each of which the producer pays the licensor an option fee in order to tie up the rights. These fees are only a small fraction of the overall cost of the rights and are usually deducted, partially or in full, from the option exercise price when and if it is paid. The option periods are not mandatory and the producer can decide to go into production at any moment before the option expires, paying the amount remaining due all at once. The option exercise price is the actual licensing fee paid to purchase the rights, commonly an upfront payment due no later than the day of principal photography. It can be either a flat fee or calculated as a percentage of the overall cost estimate of the film capped above and below (see point 5.d)

Both when optioning a novel or a screenplay, big names aside, the licensor will not see any additional euro independently of the success of the film beyond the royalties (aka residuals) from the collecting societies. In the uncommon case that the producer agrees on a share on the net revenues for the licensor, any amount paid to the latter before the film release will be considered as an advanced minimum guarantee and, therefore, applied to his share.

Timeline for the sample option agreement of a novel below: 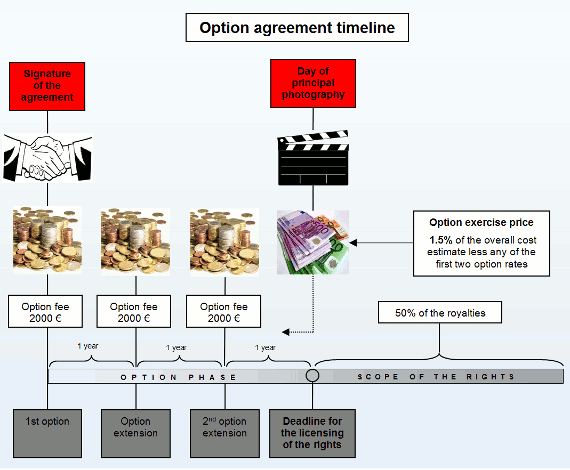 These are some of the possibilities the producer could encounter depending on the estimated budget of the film, in accordance with point 5 in our sample agreement below:

Once the option is exercised, the option agreement works as a licensing agreement according to the conditions agreed upon signature, notably as to the assigned rights (adaptation, production, distribution, exhibition, et cetera) and the scope of the rights in time and space (in the example below the rights are assigned in perpetuity - until the copyright expires and the work enters the public domain - for the entire world). Additionally, it is in the producer’s best interest to estipulate some other key elements such as the remake (point 7), the continuation of work - sequels, prequels, spin-offs - (point 8) or the theatre adaptation (point 9.a); any right not explicitly assigned will remain the sole property of the copyright’s owner. The choice of law and jurisdiction (see point 17) is equally important, especially in the case of an international agreement. Conversely, the editor/author may want to specify the use and position of the original work and the writer’s names on the credit titles (point 13).