Many things have changed since 45 theatres in 24 cities established the first pan-European network of cinema theatres in 1992, but faithful to its funding principle of diversity, Europa Cinemas has evolved throughout the years to match the needs of the exhibition sector. Ever since, the network has supported cinema theatres in their struggle to keep showing European films. To date, the Paris-based association manages four programmes comprising 1,170 cinema theatres -roughly 18% of them outside Europe- (almost 3,200 screens) spread over 675 cities in 68 countries.

On the turn of the century the European Union adopted a new motto, United in diversity; a new symbol but an old idea, as the European institutions had realized long before the best way to vertebrate the Union was through culture, fostering all and each of its national cultures Europe-wide. During the 1980s, the wave of liberalization in the broadcasting markets boosted by the Commission bred the ground for an increase in the demand of audiovisual content, especially of feature films. This, along with the steady downturn in cinema attendance in Europe, justified a concise action by the European institutions so as to take advantage of the new opportunities as much as to confront the challenges. A new tool was designed to promote European non-national films and enhance cooperation between countries within the Union: in 1991 the MEDIA Programme was launched. Two years later the Maastricht Treaty was signed, giving the Union much more leeway in the fields of education and culture.

In observance of the principles of subsidiarity and competition, the scope of MEDIA comprises the domains of pre-production, distribution, training, festivals and promotion. It is in the latter in which Europa Cinemas plays a fundamental role, being the one and only institution granted by MEDIA exclusively devoted to the exhibition sector. Alongside MEDIA, the French CNC has been contributing to Europa Cinemas over the years. The network was created with a clear mandate to boost non-national European films by improving their circulation within the Union, therefore enhancing the cultural diversity in the old continent and getting citizens to better know each other. Hence, the Europa Cinemas–MEDIA support is distributed mainly according to the levels of non-national European screenings in each member theatre, arguably the unit of measure for diversity. 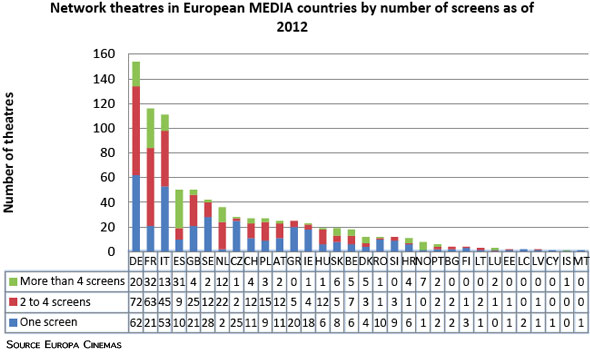 Additionally, Europa Cinemas also manages the Eurimages’ fund devoted to cinemas in countries outside the MEDIA Programme but member of the Council of Europe, extending the action range of the association. As of 2012 Bosnia and Herzegovina, Macedonia, Serbia, the Russian Federation and Turkey have theatres under this scheme. In addition, since 1994, Europa Cinemas is also in charge of a programme of the French Ministry of Foreign Affairs to promote the circulation of European films aimed at European countries beyond the scope of MEDIA and Eurimages. This network currently involves 11 theatres (18 screens) in 10 cities in Armenia, Belarus, Kazakhstan, Kosovo, Moldova and the Ukraine. Moreover, Europa Cinemas has also managed other schemes in the past such as Africa Cinema and Euromed Audiovisual I and II. 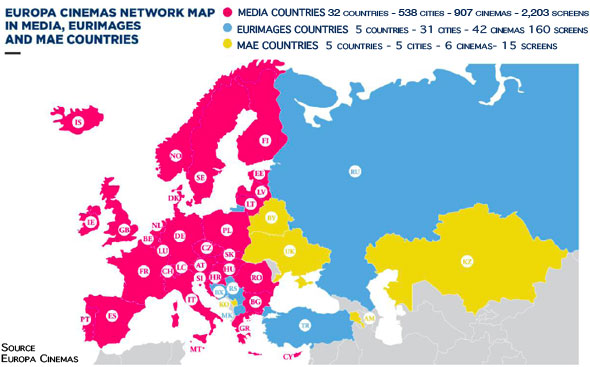 Europe is not enough

At a time when the Treaty of Lisbon widened the EU’s competencies in the field of foreign affairs, the European Parliament approved the 3-year preparatory action MEDIA International, to be followed by the Commission’s MEDIA MUNDUS Programme - mirroring the existing MEDIA Programme. This cultural diplomacy tool aims to promote European cinema outside the continent as well as to establish durable ties with thriving cinema industries (notably Asia, the southern Mediterranean countries and Latin America). Once again, Europa Cinemas won the tender to put in place the exhibition scheme and Europa Cinemas International (Europa Cinemas MUNDUS since 2012) was created, ever since boosting the position of European films all around the world. In accordance with the principle of reciprocity, the scheme is also devoted to enhancing the variety of foreign cinema from the abovementioned regions in our theatres.

At the moment of writing this report, the MUNDUS network comprises 819 screens (215 theatres) in 26 countries outside Europe, with Brazil, Japan, Colombia, Argentina and South Korea ranking at the top five by attendance level within the network. As for Europe, 1,248 screens in 493 theatres have joined this programme.

But, how does it work?

As per the 2012 guidelines for the Europa Cinemas-MEDIA scheme, any European theatre established in the EU, Croatia, Iceland, Liechtenstein, Norway or Switzerland shall be deemed eligible for membership. In order to join the network it is required to match a series of criteria; the theatre must reach a minimum of 520 screenings a year and at least 70% of the European non-national screenings must be first-runs. As for the capacity, the venue must accommodate at least an audience of 70 people and no screen should have less than 50 seats. Additionally, a minimum yearly number of admissions is required, varying from country to country from 20,000 to 30,000 admissions, therefore assuring a support only for viable activities.

In order to access the network and, afterwards, the funding, the theatre has to be above the threshold of 25% of the yearly screenings devoted to non-national European films (SENN) for one-screen cinemas, progressively decreasing down to 15% for theatres with more than 12 screens. Moreover, in terms of diversity, the yearly programme should contain films from a minimum of 5 different countries in the case of single-screen cinemas, 6 for two to five-screen theatres and at least 9 for the others, provided a minimum of 28 screenings for each work.

The support is capped at between 15,000 euro for one-screen theatres and 45,000 euro for those with 15 screens or more. At least 80% of it will be calculated upon the levels of European films shown, whereas the remaining amount, 20% up to a ceiling of 5,000 euro, will be granted when the beneficiary organizes regular activities aimed at young audiences under certain given conditions. In order to be granted the maximum amount in full, an additional effort is required in the form of more than 35% of SENN (25% for one-screen theatres). Cinemas whose percentage of SENN is in between will be granted proportionally. A ceiling of 1 euro per admission of non-national European films applies.

On top of that the exhibitor can get additional bonuses for the diversity of European nationalities in the programming and the screening of films awarded the Europa Cinemas Label.

The MUNDUS scheme has a similar aim but it operates differently, as theatres are supported every time European works get a minimum of 28 screenings over at least two weeks, independently of their yearly percentage of European screenings.

Nevertheless, the network is not all about money. Beyond its core activity as manager of public monies, Europa Cinemas carries out several parallel actions, including its Annual Conference, the Europa Cinemas labels and the Bologna Seminar among others, fostering the networking of its members as well as serving as a leading voice for the sector.

Anniversaries are the perfect occasion to take stock of the achievements so far. 2011 saw unprecedented results for the network in Europe; 38 million tickets for European films were sold, generating 231 million euro in the box office. Almost 60% of its screenings were devoted to European cinema -36% to non-national European films- from an average of 13 different nationalities. The abysmal difference between average levels of attendance to European films in EU theatres compared to the results within the network speaks for itself. 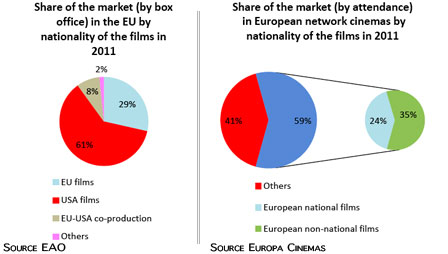 As for MEDIA MUNDUS, 3,8 million people chose to see a European film in network cinemas last year, reaching an outstanding figure of more than 127,000 screenings outside the Union devoted to European works, which generated roughly 20 million euros at the box office.

Europa Cinemas has stood out over the years not only as a reliable manager of public funds, but also a committed supporter of the exhibitors’ interests all around Europe and a worldwide advocate of European cinema. However, its path ahead does not look like a bed of roses. Amidst a technological as much as business model revolution that is shaking the foundations of the industry in an unprecedented way, with digital cinema deployment close to reach its critical mass, smaller network cinemas may face closure due to the asymmetry of the process and the lack of public support in many countries. Moreover, exhibitors will have to cope in the years to come with the increasing importance of VoD as well as the questioning of the current value chain through the several -some of them new- windows of exhibition. Taking full advantage of the social media and not letting young audiences behind will certainly be the main issues to be tackled by the network in the short term.