Canada has emerged ahead of the USA and France as the most prolific source of animation for television, with 382 hours produced in 2008 worth €181m ($265m). US production output totalled fewer hours–330–but was worth €256m ($376m)–a mark of the higher budgets invested by the major US players. 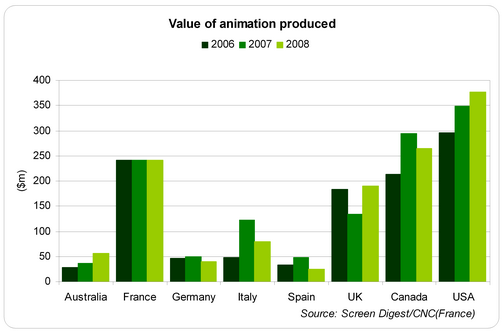 France was the leading producer in Europe by a long way, with 259 hours produced in 2008, although output has fallen from a high of 395 hours in 2006. The UK was the next largest producer in 2008, with a significant rise in production taking it past Italy.

The report by Screen Digest Senior Analyst Tim Westcott also ranks the leading companies in each county by annual output. Canada’s Nelvana, owned by Corus Entertainment, was the leading producer worldwide by average output over the last three years, ahead of Walt Disney Co. and Nickelodeon.

“There is perhaps no genre of film or television more global than animation,” says Westcott. “A popular film or TV series in one country can quickly translate into a global phenomenon. And success in these primary markets can feed through into DVD and licensing and merchandising revenues."

“On the other hand, it is a fad-driven, highly cyclical business where even companies with a hit property can find investor expectations hard to manage. There is also an increasing disparity between the kind of business in which the Hollywood players are involved and the unstable market for independent producers in Europe and elsewhere. Programme budget cuts by broadcasters and the flat DVD market can make animation a tough business."

“While the rewards for success can be high, animation is also costly and time-consuming and a return on investment can be slow to arrive. Government-run support schemes offering loans and subsidies, tax breaks or other facilities are giving producers in the countries that offer them an increasingly important edge.” 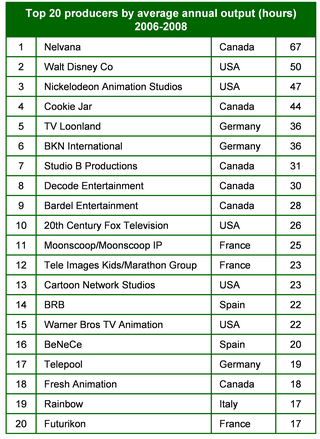