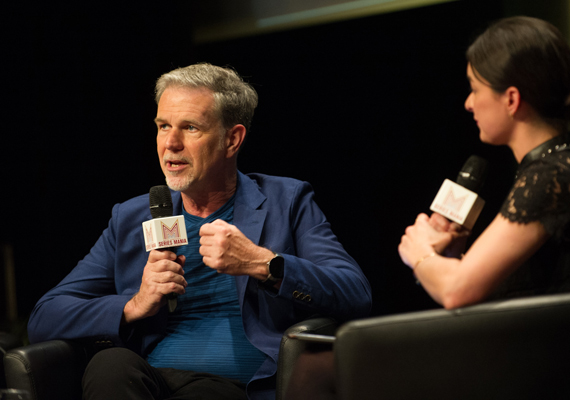 One of the most eagerly awaited appearances at the first edition of the Lille Transatlantic Dialogues held on 3 May (read the report) – a full day of keynote speeches and discussions organised by Séries Mania as part of the European Project and Talent Forum, which will become an annual rendezvous for major political, corporate, creative and economic players from the TV and culture sectors in Europe and the USA to exchange ideas – was that of Netflix co-founder, chairman and CEO Reed Hastings.

Netflix has notoriously been “investing heavily around the world”, a strategy that also applies to Latin America and Asia, but as the main focus of the talk was the continued expansion of the service in Europe and Hastings' approach to this/these market(s), he started by underlining, “In the last quarter, two of [our] biggest shows, not only in Europe but around the world, have been European shows, The End of the F***ing World and Casa de Papel, and both are as big as any Hollywood hit.” He added that 24 hours after the Lille-based event, Netflix was debuting the Danish post-apocalyptic thriller series The Rain in competition at Séries Mania. Amongst the many shows that the internet content leader produces (in 2018, 700 original TV shows are set to be made available on the service worldwide), one particular title to look forward to is The Eddy by Damien Chazelle, the Academy Award-winning director of La La Land, an eight-part musical series set and shot in modern-day Paris, featuring dialogue in French, English and Arabic, which has clear worldwide appeal.

Asked about the glocal activities of Netflix, Reed Hastings mentioned the recent French movie I Am Not an Easy Man, a gender-inversion farce in which a male chauvinist wakes up in a world dominated by women, which suddenly makes the workplace far more uncomfortable for him. The show, the company chairman and CEO pointed out, “is becoming popular all around the world because it speaks to a broad issue that people are wrestling with”. His description of the service's worldwide activities does indeed seem to transcend the global/local dichotomy: “If we can make French shows popular in Germany, German shows popular in Spain, Spanish shows popular in France… And if we can get all Americans to watch these shows as well, which will bring all of the rest [...], we are really talking about stretching everybody's global cultural envelope, so we are very ambitious about being a positive force to facilitate the understanding of other cultures through series and the cinema. What’s more, we are in a position to do it because when you are on the internet, you can be available everywhere.” The building of a “global audience” is really what makes it possible to fund series locally – a show like The Rain would probably have been hard to finance in Denmark before, because the local market is not big enough to support such high investments – and of course to dare to take such high risks. “The story might be controversial, it might be unique, it might work for a lot of people or just a few... We have to be humble; it is hard to predict, so [...] let the creators tell.” This emphasis on narration nevertheless places VR on a par with gaming, in the Netflix co-founder's eyes, which is why the company does not particularly intend to experiment with this technology.

The idea driving the Netflix model is to let as many creators as possible tell their stories – for Hastings, there is “so much variety” that there can never be enough shows, and he hopes the budget keeps growing so that they can “say yes to all the creators to whom we haven't yet given a platform”. The idea is also to rely on the non-linear dimension of the service, which allows them to “have multiple shows at once”, available everywhere in the world, and to let the individual decide what he or she wants to see, when and where, and in what language: “The major films are dubbed in 40 languages around the world. We're not quite there yet, but [...] we are breaking down barriers, in the same way that film has been doing for a long time. This is what is so great about Netflix: you can decide which shows you watch, on which days, whether you want subtitles or not and which language you want them to accompany.”

If you look at it from that angle, there is not so much competition between the different platforms and models as general growth: “They do great work. If we all make great content, people will watch us more [because] people watch content on multiple networks just as they read multiple books or listen to multiple musicians.” In the USA, Netflix conquering over 50% of households only brought users of cable and satellite services down by 3%, he points out, also indicating that Netflix and HBO actually work together internationally. So his idea of expansion is very much non-antagonistic and based on binary dynamics, but collaborative ones. “The internet [...] opens things up. We get to let the individual person decide. It's so much more powerful.”

Just as the Séries Mania guest of honour dismissed the notion that there might be a “bubble” by talking about possibilities opening up, he also insisted on the idea that Netflix does not aim or even wish to disrupt existing systems, but instead tries to adapt to every country and follow regulations (such as the media chronology in France). “I know people see us as outsiders, and honestly, that has been true, but as we grow, it is our responsibility to try to figure out all of the systems in the different countries, and be a constructive partner, rather than be on the outside.” In France, where the launch of Netflix, four years ago, left many question marks as to whether it was going to fit into the local ecosystem, Orange, for instance, has now incorporated Netflix services very efficiently, and beyond the fact that “the production community is very excited about shows getting funded”, the American leader, now “partnered up with the paid TV industry”, has gained many allies.

The non-disruptive argument also answers the question of a potential competition between Netflix productions and films made for the theatre, seen by Hastings as just as complementary as cooking and going to the restaurant. The aim is to use the members' fees to produce movies and make them available to them, “and not try to compete with the movie system”.

One advantage that Netflix does have over “GAFA” (Google, Apple, Facebook, Amazon) and all ad-based models is that as its money comes from subscriptions, there is no user data collection or migration, which already makes it compliant with the new European General Data Protection Regulation (GDPR), effective from 25 May, and is added evidence that the Netflix model does indeed fit into the European environment.