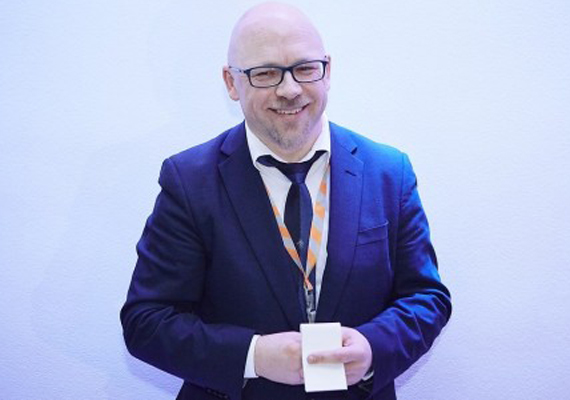 Lithuania has certainly been in the spotlight this year. The presence of Lithuanian productions and co-productions at major film festivals (see the news) and the impressive tax incentive results (see the news) bode well for the future of the Baltic country. In order to further explore the latest news, we had a chance to chat with the director of the Lithuanian Film Centre, Rolandas Kvietkauskas, who announced during a special presentation at Industry@Tallinn and Baltic Event that the national tax incentive would rise from 20% to 30% in 2019 - a change that will also apply for the next five years.

Cineuropa: You have had some positive results related to your tax incentive scheme. What were the keys to this success, and how did you make Lithuania attractive?
Rolandas Kvietkauskas: The short answer is highly professional crews, effective producers, a flexible incentive scheme and, of course, a more lengthy cinematic experience that helps to attract more ambitious projects. So far, we have almost 90 films that took advantage of our incentive scheme during the period 2014-2018, with some of them still to come. We are also happy to see that more arthouse films are selecting Lithuania as a location. This also stands as a testament to both the level of professionalism that our services can provide and their sensitivity to the artistic needs of these movies.

A couple of months ago, you announced your latest slate of funding for minority co-productions; could you give us a better overview of that?
Besides the obvious partnerships with Latvia and Estonia, we supported minority co-productions with Poland, France, Norway, Russia, Romania, the UK, Georgia and Spain. After several years of supporting minority co-productions, we modified the rules slightly this year. Now, those productions that invest more in Lithuanian creative involvement can expect a bigger grant, which can even reach as high as €200,000. This is just one of the examples that illustrate the priorities of the scheme.

Going back to national cinema, your second funding call has just ended, and taking into account the previous results, the total amount earmarked for production is over €4.5 million. What are your goals for this slate and the next one?
Our overall priority is to encourage co-productions, as we would like to increase the diversity of the productions we support. We really enjoy it when successful debutants come back with their second or even third films. Furthermore, we are increasingly putting our focus on the support of project development, which ranges from individual grants for screenwriters to film development applications submitted by production companies. Also, we would like to have closer cooperation with LRT, the public broadcaster, and hopefully soon we will expand further in the domain of TV drama by also supporting productions, because currently we only have a slot for scriptwriters.

We read that the national market share is predicted to hit more than 30% in 2018, exceeding last year’s record of 21.8%. Could you give us a better overview of this aspect as well?
For several years, the share of national films on the market has been around 20%, and it would be great to keep it around the same figure. I think it would create more stability and offer an extra motivation to the industry. To attain these numbers, you have to combine the releases of both commercial and arthouse films. Last year, we had 11 national films released in cinemas, and this year, the number will increase.

What are your expectations for 2019?
For next year, I would love to see a balance struck between commercial and arthouse films in order to offer a more diverse picture of Lithuanian cinema to the local audience. The Lithuanian Film Centre will continue to support the release of national films and facilitate their marketing strategies so as to make them even more attractive to viewers. We hope to initiate a special programme to increase the number of digital screenings in various regions of the country, as there are different mechanisms, and this will probably give a wider audience access to the movies.

We have witnessed the success of Lithuanian films and co-productions, in terms of both films and an industry presence, at most of the major film festivals in the past six months. What are your expectations in this regard?
Yes, indeed; this year, we were present at more than 20 different events in various locations, from Paris to Beijing and from Warsaw to San Sebastián. We established good cooperation with our friends from Estonia and Latvia, and at some markets, we presented a joint programme with them. As a result of these initiatives, people are paying more attention to our cinema, so we have ambitious plans for next year. Several first-time directors will aim to premiere their works at various festivals, so we have high hopes for them. Finally, we are in the process of digitising our film heritage, and we would like to share it, for the first time, with the international audiences, as most of these films were never able to travel abroad when they were made.

Critique : We Met in Virtual Reality