The Alliance for Development initiative at Locarno Pro has wrapped its fourth edition after running for the whole three-day period (3-5 August) as part of the Locarno Film Festival’s industry section. As at previous editions, the alliance’s focus was to encourage projects that have received, or are planning to apply for, co-developing funds and co-productions in Switzerland, Italy, France or Germany, with the ultimate aim of improving cooperation between the national film industries in each country. Thibaut Bracq is the new project coordinator this year, and the programme is organised in partnership with MiBACT and the FFA, in cooperation with Eurimages and the European Producers Club (EPC), and with the support of the Federal Office of Culture (FOC, Switzerland) and MEDIA Desk Suisse.

On the first day, the participants, made up of the director and at least one of the producers attached to the projects – two with a majority German producer, two with a majority Italian producer and three projects from Switzerland – were given the unique opportunity to present their projects during closed sessions, receiving advice and suggestions from film experts on the lookout for their next venture.

The following day, Cristiana Giaccardi, project manager at the Ticino Film Commission, gave those present a brief introduction to the regional foundation, which was followed by a plenary session zooming in on a case study of Annarita Zambrano’s After the War [+lire aussi :
critique
bande-annonce
interview : Annarita Zambrano
fiche film]. Focusing on the co-production aspect of the film, the panel, comprising Stéphanie Douet of Sensito Films (France), Mario Mazzarotto of Movimento Film (Italy) and Éric Lagesse, CEO of world sales agent Pyramide Films (France), discussed the challenges of co-production, the different approaches to distribution in both countries, and the chances of success that their endeavour had. A specialised session organised by Mathias Noschis (Alphapanda) followed up on this and was dedicated to marketing strategies during the development stages.

The final day was dedicated to another session of one-on-one meetings with potential partners, and a panel discussion with sales agents Daniela Elster (Doc & Film, France), Katarzyna Siniarska (New Europe Film Sales, Poland) and Andreas Rothbauer (Picture Tree International, Germany), who shared their experiences on the international market but also their strategies when it comes to festivals, plus the more general aspect of the future of distribution of European films on the continent and abroad. The programme was wrapped with a group meeting and an exchange of feedback between the project manager and the participants. 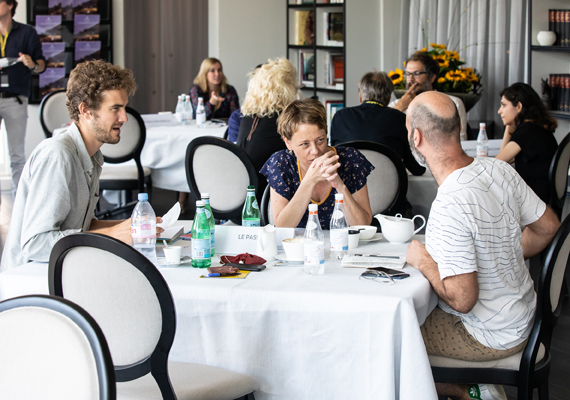 As at previous editions, the projects spanned a range of genres and subject matter, ranging from dramas and biopics to animations and children’s films. The details of the projects presented during the 2018 Alliance for Development are as follows:

F for Fittko (F wie Fittko) by Loren D Marsh is a biopic about Lisa Fittko, a World War II resistance hero, and her later life in Cuba when she and her husband Hans were forced to flee Nazi Germany. Produced by Tobias Gaede (Zischlermann Filmproduktion) and supported by the FFA and the CNC, the project is looking for possible co-producers and potential partners (Germany/France/Spain/USA).

Grisella the Donkey (Das Eselchen Grisella) by Hüseyin Tabak (The Legend of the Ugly King [+lire aussi :
bande-annonce
fiche film]) is a film adaptation of the children’s book of the same name by Heinrich Maria Denneborg, which follows an orphan, Tino, who’s given Grisella, a magical donkey that can also talk. Produced by Dorothe Beinemeier (Red Balloon Film) in co-production with Philipp Kreuzer (Maze Pictures), and supported by the FFA and MiBACT, the project is looking for co-producers, distribution and world sales agents (Germany/Italy/Belgium).

The People Smuggler (Le Passeur) by Kaveh Bakhtiari, who is delving further into the topic he dealt with in his documentary L’escale [+lire aussi :
critique
bande-annonce
fiche film], follows Ali, an Afghan boy who has found shelter and is working in a hairdressing salon in Athens. He tries to stay away from his boss’s activities, as he is a people smuggler. Produced by Tristan Aymon and Isabelle Zampiero (Terrain Vague) with Fenia Cossovitsa (Blonde SA), and supported by MEDIA Desk Suisse, the project is looking for French and German co-producers, casting directors and world sales agents (Switzerland/Greece/France/TBC).

The Tree of Ears (L’Albero delle Orecchie) by Shadi Adib is an animated feature film, in which Simon, a kid living on a planet where no one has ears, receives NASA’s Voyager Golden Record, which was launched into space 40 years ago. Produced by Matteo Pecorara (Small Boss) in co-production with Ken Anderson (Redkite Animation), Fabian Driehorst (Fabian&Fred) and Juan Carlos Concha (Apeman Studio), and supported by MiBACT and the FFA, the project is looking for world sales agents and TV pre-sales (Italy/Germany/UK/Spain).

They Called Him… Bud Spencer (Lo chiamavano... Bud Spencer) aims not to be another biopic, as it tries to shed light on the life of Carlo Pedersoli (aka Bud Spencer) before he rose to fame in the domain of Italian and world cinema. Produced by his son Giuseppe Pedersoli (Smile Production) in co-production with Marcus Roth and Sven Burgermeister (Goldkind Filmproduktion), the movie has received support from MiBACT and the FFA, and the project is looking for international partners (Italy/Germany/South Africa).

Semret [+lire aussi :
bande-annonce
interview : Caterina Mona
fiche film] (working title: Renaissance) by Caterina Mona is a psychological drama that follows 34-year-old Semret, an immigrant from Eritrea who has been living in Zurich for the past 14 years with her little daughter. However, a secret from her past will return to haunt her. Produced by Michela Pini (Cinédokké) and supported by MEDIA Desk Suisse, the project is looking for German and other European co-producers and sales agents (Switzerland).