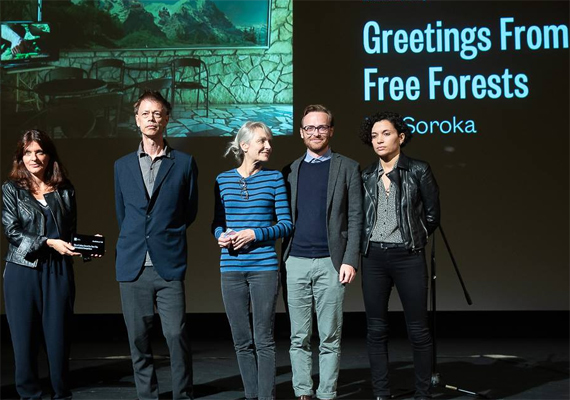 Greetings from Free Forests by Ian Soroka and Earth by Hiroatsu Suzuki and Rossana Torres were the big winners at DocLisboa, the 16th edition of which came to a close yesterday. The winners were unveiled on Saturday night, during a ceremony that was followed by the screening of Infinite Football [+lire aussi :
critique
bande-annonce
fiche film] by Romanian director Corneliu Porumboiu.

Besides announcing the winners, APORDOC, which organises DocLisboa, also unveiled some of its activities on the horizon for the coming year. The most exciting one is a joint venture with Desforra Apache to ensure the local theatrical distribution of The Dead and the Others [+lire aussi :
critique
bande-annonce
fiche film] by João Salaviza and Renée Nader, scheduled for March 2019. The film premiered at the latest Cannes Film Festival and received the Special Jury Prize in the Un Certain Regard section.

Here is the full list of winners at DocLisboa:

Bouli Lanners • Réalisateur de Nobody Has to Know