The chair of the San Sebastián competition jury, Luca Guadagnino, unveiled We Are Who We Are in its entirety for the first time, out of competition, at the San Sebastián Film Festival. It was presented as an almost eight-hour-long screening, and critics in the Basque city were blessed with a short interlude at around the 200-minute mark, coinciding with the end of the fourth episode. An HBO and Sky Italia production, We Are Who We Are is being broadcast as an eight-episode series around the world, and only the first four episodes were sent out to critics to review before it began airing weekly on television at the start of September.

The director has argued that he prefers to think of the work as a long movie, so a full day at the cinema seems to be the purest way of seeing it as the director intended, especially as Guadagnino has eschewed the usual techniques of plot melodrama and fast cuts used for television in favour of long scenes. Nonetheless, while admirable in its refusal to follow convention, and making use of the brilliant photography of three cinematographers, Fredrik Wenzel, Yorick Le Saux and Massimiliano Kuveiller, it’s hard not to feel that the end result doesn’t justify the length. What emerges is surprising television but languid cinema.

Guadagnino is still riding the wave of success that came with his international smash Call Me by Your Name [+lire aussi :
critique
bande-annonce
Q&A : Luca Guadagnino
fiche film]. On the surface, it is the fans of that 2017 movie adaptation of André Aciman’s novel that We Are Who We Are seems likely to most appeal to, as it’s about young American kids coming of age and experimenting with their sexuality (and gender identities) in Italy. And yet, in its shooting style and aesthetic execution, it’s probably with his recent remake of Suspiria [+lire aussi :
critique
bande-annonce
fiche film], with its locked-in school environment and homage to Rainer Werner Fassbinder, that this series has most in common. Having said that, it would be too much of a compliment to We Are Who We Are to call it Guadagnino’s Berlin Alexanderplatz.

It’s only in the home stretch that We Are Who We Are reveals its major theme about America being a Paradise Lost and starts to concentrate on its two beguiling central characters, teenagers Fraser (Jack Dylan Grazer) and Caitlin (Jordan Kristine Seamón). Their sexual awakenings, especially Caitlin’s eschewing of feminine social norms, is not only fascinating, but it’s also told without falling prey to sensationalism. There are also some outstanding moments in the series that revolve around their growing friendship, including a wedding party, a Blood Orange concert and the emotional fallout after a friend dies, but Guadagnino is less interested in the other characters, which explains why most become forgotten in the final, musical part of We Are Who We Are.

It’s a shame because, initially, many of them are intriguing. A new commander, Sarah (Chloë Sevigny), arrives with her wife Maggie (Alice Braga) to take control of an American base in Italy in 2016, as Donald Trump is campaigning for the White House. Caitlin’s father, Richard (Kid Cudi), orders a MAGA cap. Fraser, who is so awkward and physically fights his mother, is on a spectrum, but which is unexplained. Indeed, clarity is not what Guadagnino is even striving for, and that would be fine if the characters (away from the central pairing) were not so under-written. It’s hard to have empathy for any of them, and that makes We Are Who We Are frustrating, especially as there are several moments when Guadagnino makes American bases great again.

We Are Who We Are is an Italian-US co-production staged by The Apartment Pictures and Wildside SRL for HBO and Sky Italia.

plus sur : We Are Who We Are 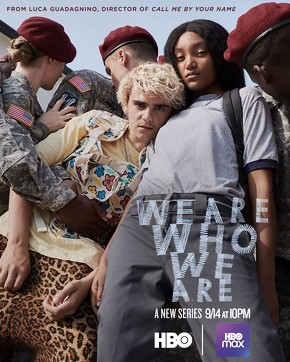